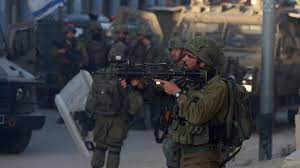 JERUSALEM (AP): The Israeli military shot and killed a Palestinian man early Thursday during a raid in the occupied West Bank, the Palestinian Health Ministry said, the latest bloodshed in months of violence between Israelis and Palestinians.

The military, which has been carrying out nightly raids in the territory since early last year, said soldiers operating in the Qalandiya refugee camp were being struck by rocks and cement blocks from rooftops above and responded with live fire. The Palestinian Health Ministry identified the man killed as Samir Aslan, 41.

His death came a day after two Palestinians were killed in separate incidents in the West Bank on Wednesday, one during an Israeli military arrest raid in the territory’s north and another after stabbing and wounding an Israeli man in a southern settlement.

The raids began last spring, after a spate of Palestinian attacks against Israelis killed 19 people. Israel says they are meant to dismantle militant networks and thwart future attacks. The Palestinians see them as further entrenchment of Israel’s 55-year, open-ended occupation of land they seek for their future state.

The raids sent tensions soaring and prompted another wave of Palestinian attacks in the fall that killed 10 Israelis. Nearly 150 Palestinians were killed by Israeli fire in the West Bank and east Jerusalem in 2022, making it the deadliest year since 2004.

The violence comes as Israel’s new ultranationalist and ultra-Orthodox government — it’s most right-wing ever — is charting its legislative agenda, one that is expected to take a tough line against the Palestinians and drive up settlement construction in the West Bank.

Israel captured the West Bank in the 1967 Mideast war, along with the Gaza Strip and east Jerusalem, territories the Palestinians want for their future independent state. Israel has since settled 500,000 people in about 130 settlements across the West Bank, which the Palestinians and much of the international community view as an obstacle to peace.