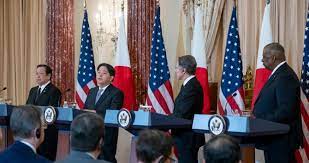 WASHINGTON (AP): The top national security officials from the US and Japan unveiled plans Wednesday to strengthen the alliance to help counter threats from North Korea and China, which they called the greatest challenge in the region.

Secretary of State Antony Blinken said the agreement reflects the two nations’ effort to deepen cooperation “across all realms,” including space, cybersecurity and emerging technologies.

“It is hard to overstate the importance of the US-Japan alliance for more than seven decades,” said Blinken, following the meeting at the State Department. “It’s been the cornerstone of peace and stability in the Indo-Pacific, ensuring the security, the liberty and prosperity of our people and people across the region.”

The two nations are revising their joint defense posture and planning increased military exercises as they confront rising threats from North Korea and increasing aggressiveness from China.

The US and Japanese foreign and defense ministers agreed to adjust the American troop presence on the island of Okinawa. Prior to the meeting, Japan’s defense ministry announced it was ready to start construction on an uninhabited island where the two militaries will hold joint military exercises.

Wednesday’s discussions will be followed by a meeting on Friday between President Joe Biden and Japanese Prime Minister Fumio Kishida at which they will underscore the importance of the relationship.

Kishida, on a weeklong trip to visit allies in Europe and North America, signed a defense agreement with British Prime Minister Rishi Sunak on Wednesday that strengthens military ties between their two counties, also in response to China’s increasing military assertiveness.

Following their talks, Blinken, Defense Secretary Lloyd Austin and their Japanese counterparts, Yoshimasa Hayashi and Yasukazu Hamada, planned to issue a joint statement that will adjust, but not increase, the American troop presence on Okinawa.

Speaking to reporters after the meeting, all four condemned China’s increasing aggression in the region and said the agreement will provide a strong path to counter that.

Austin noted that the agreement affirms America’s “ironclad commitment to defend Japan with a full range of capabilities, including nuclear” and underscores that Article 5 of the mutual security treaty applies to the Senkaku Islands. The disputed islands outside Japanese territorial waters are also claimed by Beijing.

The statement also adds a formal mention of space in the longstanding security treaty, making clear that “attacks to, from and within space” could trigger the mutual defense provisions of the treaty, according to an administration fact sheet. That had previously been outside the scope of the agreement.

Earlier Wednesday, Japan said it would soon begin constructing a pair of runways on the small southern island of Mageshima where the two militaries are to conduct joint exercises, including those of F-35B stealth fighters, amphibious operations and missile interception beginning around 2027.

The construction could start as early as Thursday, it said. The island, off the southwestern coast of Kagoshima on the southernmost main island of Kyushu, will be a hub for troop deployment and munition supply in case of a conflict like a Taiwan emergency.

Japan and the United States are moving one of their key flight exercise sites to the southern island, which is much closer to the US air base of Iwakuni, home to an F-35B fleet, than the current training site on Iwo Jima, where one of the bloodiest and most iconic battles of World War II was fought.

The changes in the deployment on Okinawa will transform the 12th Marine Regiment into a smaller, more rapidly mobile unit — the 12th Marine Littoral Regiment, which will be designed to be better equipped to fight an adversary and defend the US and its allies in the region, US officials said.

The officials said the decision will not increase the number of Marines on the island and does not come with any significant change in weapons capability.

Reinforcement of military capability or troops is a sensitive issue for Okinawa, site of one of the bloodiest ground battles at the end of World War II. The island hosts more than half of the US troops based in Japan, and Okinawans want that number reduced.

A senior administration official, who requested anonymity to discuss negotiations with the Japanese, said historically negotiations involving US force posture in Okinawa have been “unbelievably fraught, incredibly challenging and difficult” and often took years to complete. But negotiations before Wednesday’s meeting were completed with striking speed, the official said.

The agreements follow Japan’s announcement last year that it would increase its defense spending to 2 percent of gross domestic product over five years. That would make its defense budget the world’s third-largest — a dramatic shift in Tokyo’s priorities that reflects growing concerns about North Korea and potential Chinese military action against Taiwan.

While there is a growing fear of a Taiwan emergency, many islands in the region are concerned that a defense buildup could increase the risks of getting embroiled in war.

The change in Okinawa is part of a broader shift being made across the Marine Corps to make the service better able to operate in contested areas, particularly within striking range of an enemy. That element is critical in the Indo-Pacific, where thousands of US and allied forces are easily within missile — or even rocket — range of both China and North Korea.

One Marine littoral regiment has already been set up in Hawaii, the second would be in Okinawa..

Details are still being worked out, but a littoral regiment is made up of roughly 2,000 Marines, and includes a combat team with an anti-ship missile battery, a logistics battalion and an air defense battalion. The current Marine regiment on Okinawa that it would essentially replace includes about 3,400 Marines and sailors. The overall number of Marines on Okinawa would remain about the same, officials said.

In their talks on Friday, Biden is expected to raise with Kishida the case of Lt. Ridge Alkonis, a US Navy officer deployed to Japan who has been jailed after pleading guilty last year to the negligent driving deaths of two Japanese citizens in May 2021, according to the senior administration official.

Alkonis’ family says he suddenly fell unconscious behind the wheel during a family trip on Mt. Fuji. He was so out of it, they say, that neither his daughter’s screams to wake up nor the impact of the collision roused him.

Alkonis’ car veered into parked cars and pedestrians in a parking lot, striking an elderly woman and her son-in-law, both of whom later died. Alkonis was sentenced to three years in prison in October, a sentence that the family and US lawmakers have called unduly harsh considering the circumstances. Alkonis also agreed to pay the victims’ $1.65 million in restitution.

The official said the administration was working “to find a compassionate resolution that’s consistent with the rule of law.”