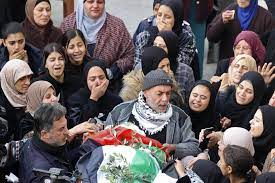 Israeli soldiers had entered the village of Kafr Dan in Jenin “in order to demolish the residences of the assailants who were involved in the shooting adjacent to the Gilboa (Jalame) Crossing, in which Major Bar Falah was killed,” Israel’s military said

The army gave no immediate comment on the deaths.

Falah was killed in September 2022 during clashes with Palestinian gunmen at the Gilboa checkpoint between Israel and the occupied West Bank.

After he was killed, the Al-Aqsa Martyrs’ Brigades — the armed wing of Palestinian president Mahmud Abbas’ secular Fatah party — claimed responsibility for the Israeli major’s death.

A subsequent raid by the Israeli army left a Palestinian teenager, 17-year-old Uday Salah, dead after he was “killed by a bullet to the head”.

The Israeli army had said at the time its forces were “mapping out the homes of the terrorists who killed Major Bar Falah and arresting suspects through the West Bank”.

Israel regularly destroys the homes of individuals it blames for attacks on Israelis.

Human rights activists say Israel’s policy of demolishing the homes of suspected attackers amounts to collective punishment, as it can render non-combatants — including children — homeless.

But Israel says the practice is effective in deterring some Palestinians from carrying out attacks.

The two deaths are the first in the West Bank for 2023.

According to United Nations data, 2022 was the deadliest year for Palestinians since the 2002-2005 uprising, known as the Second Intifada, with at least 150 Palestinians and 26 Israelis killed last year across Israel and the West Bank, including Israeli-annexed east Jerusalem.