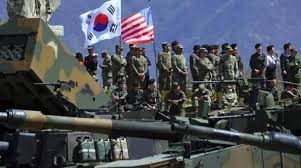 In an interview with the Chosun Ilbo newspaper published Monday, Yoon said the United States’ existing “nuclear umbrella” and “extended deterrence” were no longer enough to reassure South Koreans.

“The nuclear weapons belong to the United States, but the planning, information sharing, exercises and training must be done jointly by South Korea and the United States,” Yoon said, adding that the US was “quite positive” about the idea.

His comments came a day after the North’s state media reported that leader Kim Jong Un had called for an “exponential” increase in his country’s nuclear arsenal and new intercontinental ballistic missiles (ICBMs) to counter what it termed US and South Korean hostility.

In 2022, the North conducted sanctions-busting weapons tests nearly every month, including firing its most advanced ICBM ever.

Under the hawkish Yoon, South Korea has beefed up joint military drills with the United States, which had been scaled back during the pandemic or paused for a bout of ill-fated diplomacy with the North under his predecessor.

Since talks collapsed in 2019, Kim has doubled down on his banned weapons programmes, and Seoul and Washington have warned for months that Pyongyang is preparing to conduct its seventh nuclear test.