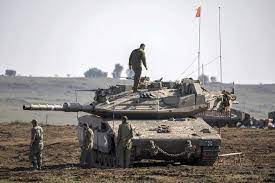 The coalition make-up has raised questions about authority over a military that is designed in part to serve as a melting pot for a fractious Israeli society, as well as how it will handle tinderbox territories where Palestinians seek statehood.

“I will ensure that outside pressures — political, legal and others — stop with me and do not reach the gates of the IDF (Israel Defense Forces),” Defense Minister Yoav Galant said at the appointment ceremony for the new top general, Herzi Halevi.

Halevi, who though raised in a Jewish religious-nationalist home has avoid public displays of piety or politics, said: “We will preserve one IDF — purposeful, principled and professional, shorn of any consideration that is not related to defense.”