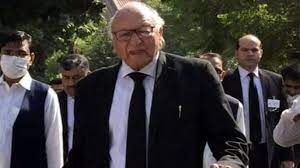 Abdul Latif Afridi received six bullets as he was sitting in the bar room and was being rushed to Lady Reading Hospital when he breathed his last on the way.

The attacker who claimed to be a lawyer himself was arrested from the crime scene.

The litigants started to leave after the administration shut down Peshawar High Court’s gates and barred entry of people.

The dead body was sent to Afridi’s ancestral village in an ambulance, the spokesman added.

The prime minister said that the brutal killing of Lala Abdul Latif Afridi was a very sad news.

“The Government of Khyber Pakhtunkhwa (KP) should punish those involved in the act of terrorism according to the law,” he said.

“The deteriorating situation of law and order in the KP is very alarming,” he expressed concerns.

“Abdul Latif Afridi fought for the supremacy of the Constitution, democracy, rule of law and human rights all his life,” the prime minister said.

“He was a great lawyer and brave political leader. He was expelled from the university for supporting the mother of the nation Ms Fatima Jinnah. He used to speak the truth and did not care about the consequences,” he added.

“Alas! Today a strong voice of Constitution, democracy and rule of law has been silenced. The political, legal and democratic struggle of Lala Abdul Latif Afridi will continue,” he stated.

“May Allah grant the deceased a high place in Jannat al-Firdous and grant patience to the bereaved family,” he prayed.

“The killing of Shaheed Abdul Latif Afridi is very sad. His struggle for the restoration of democracy is unforgettable,” he pointed out.

Asif Zardari also expressed his condolences to the family of Abdul Latif Afridi and the people of Khyber Pakhtunkhwa.