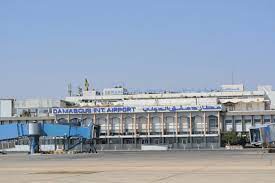 BEIRUT (AFP): The Israeli army carried out a missile strike on Damascus International Airport on Monday that killed four people, including two Syrian soldiers, according to a human rights monitor.

This is the second time in less than seven months that the Damascus airport, where Iranian-backed armed groups and Lebanese Hezbollah fighters are present, has been hit by Israel.

The attack — which occurred around 2:00 am (2300 GMT) — put the country’s main airport out of service, according to Syria’s state news agency SANA.

Israel carried out the strike with “barrages of missiles, targeting Damascus International Airport and its surroundings,” a military source told SANA, which reported that two Syrian soldiers were killed.

But the Britain-based Syrian Observatory for Human Rights — which relies on a wide network of sources on the ground in Syria — said a total of four people had died in the early morning attack.

The missiles also hit “positions for Hezbollah and pro-Iranian groups inside the airport and its surroundings, including a weapons warehouse,” Abdul Rahman said.

Since civil war broke out in Syria in 2011, Israel has carried out hundreds of air strikes against its neighbor, targeting government troops as well as allied Iran-backed forces and fighters from Lebanon’s Shiite militant group Hezbollah.

While Israel rarely comments on specific reports of its attacks, it has repeatedly said it will not allow its archfoe Iran to gain a foothold in Syria.

“We see that our course of action in Syria is an example of how continuous and persistent military action leads to shaping and influencing the entire region,” said tweets from the IDF on Basiuk’s presentation.

“We will not accept Hezbollah 2.0 in Syria.”

The airport is in a region south of Damascus where Iran-backed groups, including Hezbollah, regularly operate.

The last time the airport was out of service was in June 2022 — also after an Israeli missile strike.

The runway, control tower, three hangars, warehouses and reception rooms were badly damaged in that attack — forcing the airport to close for about two weeks and flights to be suspended.

Just as in Monday’s attack, the Observatory said at the time that the strikes had targeted nearby warehouses used as weapons depots by Iran and Hezbollah.

The conflict in Syria started with the brutal repression of peaceful protests and escalated to pull in foreign powers and global jihadists.

About half a million people have been killed, and the conflict has forced around half of the country’s pre-war population from their homes.

Though hostilities have largely abated in the last three years, sporadic fighting at times breaks out and jihadist attacks continue, mainly in the east of the country.

In 2022, Syria experienced its lowest yearly death toll since the conflict started over a decade ago.

Among those killed in 2022 were 1,627 civilians, including 321 children, the Observatory said.