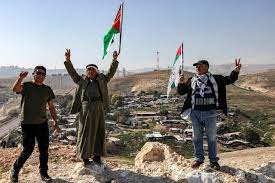 LONDON (Agencies): New Israeli restrictions on entry to the West Bank are impeding family and humanitarian access to the territory, isolating Palestinians from the world, Human Rights Watch has warned.

The laws, which were enacted last year, impose tight restrictions on the entry and residency conditions of foreigners, affecting the Palestinian diaspora worldwide and the ability of humanitarian actors to work in the West Bank, HRW said.

Those the organization spoke to who reported significant difficulty in accessing the West Bank in the wake of the new restrictions included a half-Palestinian half-European graduate student, an Irish human rights legal counsel, an American psychologist, and a British mother of two who is married to a Palestinian.

From 2006 until late last year, Israeli authorities used a three-page document to determine entry conditions for foreign visitors to the West Bank.

But the new guidelines have introduced 61 pages of new criteria, making work, study and long-term residency in the territory increasingly difficult for foreigners, HRW said.

“General policy considerations,” as termed in the guidelines, mean that Israeli authorities have often blocked entry for vague reasons, the organization added.

The guidelines say: “The implementation of this procedure shall be contingent on the security situation and the prevailing Israeli policy, which is reviewed and amended from time to time.”

The guidelines have affected a range of professions in the West Bank, including academia. A Bethlehem University official told HRW that 70 percent of faculty in one of the school’s programs were foreigners, with university authorities fearing significant staff losses.

A Birzeit University spokesperson said the institution lost eight faculty members in the past five years due to growing West Bank entry restrictions.

Roger Heacock, who worked as a professor at Birzeit for 33 years, left the West Bank in 2018 after his permit renewal request was ignored by Israeli authorities.

HRW said: “The policy deepens the way that Palestinians are fragmented across different areas and furthers Israeli control over Palestinian life.”

Ayman, a graduate student born in Europe in the mid-1990s to a Palestinian father and a European mother, told HRW that he has been unable to visit his family in the West Bank for two years as a result of Israel’s harsh entry guidelines.

Despite his extended family living in the West Bank for three generations, Ayman had not been granted a Palestinian ID card.

He said: “Palestine for me is home. My childhood, schools, classmates, friends, extended family, relatives and all the memories I have are all here. But I am in Palestine as a tourist, as a European citizen.”

Despite facing significant restrictions under the previous Israeli guidelines due to her job, Power used work contracts to obtain visas, and missed family visits and work meetings to avoid falling foul of guidelines.

But following the enactment of the new West Bank entry laws, which lack special provisions for human rights workers, Power fears she will not be granted a visa to return to the territory for work. Israel also outlawed Al-Haq in 2021 as a “terrorist organization.”

Power told HRW: “An organization can’t function or operate not knowing if their workers will be able to come back.”

Eric Goldstein, HRW deputy Middle East director, said: “By making it harder for people to spend time in the West Bank, Israel is taking yet another step toward turning the West Bank into another Gaza, where 2 million Palestinians have lived virtually sealed off from the outside world for over 15 years.

“This policy is designed to weaken the social, cultural and intellectual ties that Palestinians have tried to maintain with the outside world.”