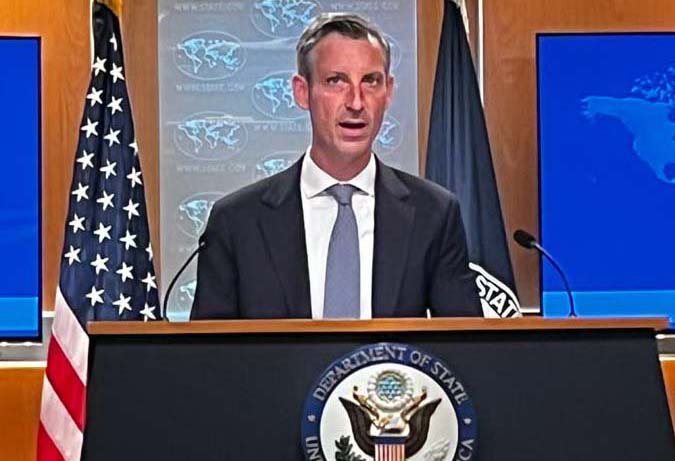 WASHINGTON DC : US State Department Spokesperson, Ned Price while replying to a question by The Frontier Post said that it’s Pakistan decision to take action against the terrorists hideouts in Afghanistan, in self defence.

Ned Price in reply to another question by The Frontier Post did not acknowledge that the US is encouraging Pakistan to take action terrorists hideouts in Afghanistan but continued by saying that Pakistan has lost many lives in terrorist attacks and that Pakistan is a partner.

To the last question of The Frontier Post that whether US is aware of the fact that on both sides of Afghanistan and Pakistan border it is mostly the Pakhtoon population and if Pakistan conducted such attacks, it could lead to a war like situation, Ned Price replied by referring to Pakistan “it’s decisions are it’s decisions.”

Yesterday press briefing at the US State Department started by question from Matt of AP and he literally jumped on Ned Price by asking what the US was doing about the girls education in Afghanistan. Matt also asked whether US was going to take some concrete action or just play with words. Matt also regretted in one of his question that why the US was in illusion that the Taliban have changed.

After Matt, Nazira an Afghan female journalist jumped by taunting saying that the Taliban say that they have defeated the US and asked what are the next steps that the US could take against the Taliban?

After Nazira, a journalist from Pakistan, Jehanzeb asked what actions can the US take against the terrorists hideouts in Afghanistan, Ned Price replied by saying that President Biden has his own commitments and his commitments are that when the US needs to eliminate simebody in Afghanistan they will do it unilaterally just like they did in the case of Al Qaeda leader Zawahri.

Mr Lalit, a journalist asked Ned Price about the growing tensions and war of words between Pakistan and the Taliban regime in Afghanistan.

Mr Ned Price very patiently answered all the related to Afghanistan and reiterated that the Taliban government can not have it both ways. He said that if the Taliban government in Afghanistan wants to grow its relationship with the rest of the world they have to allow basic human rights which comprises of girls education and women right to world. Ned Price made it clear that without women participation no country can move forward. But Ned made it clear that any future actions will be taken after consultations and ally’s and partners.

Ned Price also reminded the Taliban government in Afghanistan that the US till date continues to be the largest humanitarian aid donor in Afghanistan and banning women from work will jeopardize millions of Afghanistan from their basic needs of survival.