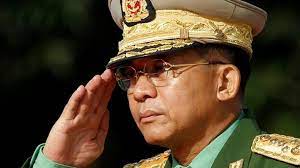 Myanmar’s ruling military dictator, General Min Aung Hlaing, unveiled plans for an election later this year and called for national unity during his speech on the 75th anniversary of the country’s independence. Military dictators urged their countrymen, other nations, and international organizations to support the genuine, discipline-flourishing multiparty democratic system in Southeast Asian nations. General also announced pardons for thousands of political prisoners along with a partial commutation of the sentences of other inmates not convicted of serious crimes, in a bid to normalize people-military ties and form a conducive environment for the military junta.

Myanmar Military Junta invaded its nation by overthrowing the elected government of Nobel literate Aung San Suu Kyi in early 2021. The Military Generals ousted the elected government over allegations of poll rigging and corruption and put the Country’s legitimate Prime Minister behind the bars. The countrywide protests erupted against the military coup which had been continuing over the past two years. The global community including the United Nations, the US, and the European Union imposed sanctions against General Hlaing and his senior aides, however utmost International pressure and global sanctions did not alter the course of the dictatoral regime.

The public was outraged by the military coup against Suu Kyi’s popular elected government and the public uprising met with a horrified and brutal crackdown by the military General, that not only intensified the violence across Myanmar but also led to the emergence of an armed insurgency in the country. According to the reports, over 27000 Burmese had been killed, thousands had been arrested, and several villages were burnt out by the Burmese military during 22 months-long civil unrest. Aung San Suu Kyi was trailed on 18 offenses and a closed-door court awarded her 33 years imprisonment on different accounts, while her National League for Democracy (NLD) party has effectively been broken up, with its Supremo and several important leaders in detention or hiding.

Previously, the Burmese general used Buddhist monks against Rohingya Muslims and wept the Muslim minority from their Country, now those trained fighters had joined the anti-Army protests and built tremendous pressure on the government.

Although, the Myanmar general has worn a white cloak to hide to change guise and also set the stage to form a political herd to deceive the world, however, the global community is aware of his malafide intentions.