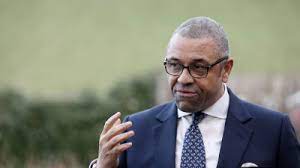 LONDON: The Foreign Secretary has issued a statement following the execution of British-Iranian Alireza Akbari

The execution of British-Iranian Alireza Akbari is a barbaric act that deserves condemnation in the strongest possible terms. Through this politically motivated act, the Iranian regime has once again shown its callous disregard for human life.

This will not stand unchallenged and we will be summoning the Iranian Charge d’Affaires to make clear our disgust at Iran’s actions. Our thoughts are with Mr Akbari’s family.