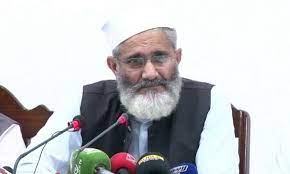 LAHORE: Jamaat-e-Islami emir Sirajul Haq has warned the rulers against the country’s worsening economic and security situation.
Addressing a training workshop for JI workers at Mansoorah on Wednesday, he added that nuclear Pakistan had remained a target of enemies of the country since it achieved the capability, and they have been continuously hatching plans to disable it.

He said the enemies wanted to create Sri Lank and Ukraine like situation in Pakistan to take advantage to unleash further propaganda against the country.

The PDM, the PPP and the PTI, Haq said, were equally responsible for the prevailing situation. He said they jointly created economic, social and political crises, adding that the troika fought to protect their self-interests, ignoring real issues. He said the government of the PDM was the continuation of the PTI as both failed to fix the economy and provide relief to the masses.

They, he added, desperately failed to bring down inflation and address the problem of rising unemployment. The provincial governments, he said, were afraid of holding local bodies elections as they could not face people. He said the governments in Pakistan were in constant habit of taking direction from Washington. He said the attitude of democratic governments also remained undemocratic in the country. He said the families and individuals run political parties in the country.

Haq asked the rulers to address the demands of the people of Balochistan. He said the residents of Gwadar were demanding their rights. The rulers, he said, must embrace them instead of pushing people to the wall. The JI chief said the elections were the need of the hour to put the country on track, but polls without reforms would bring no solution. He said the country needed civilian supremacy, a free judiciary, and an independent and powerful election commission. He said the JI would continue struggle for the rights of the people. (NNI)