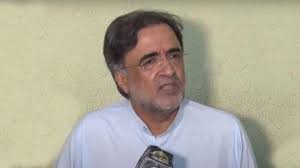 ISLAMABAD: Adviser to Prime Minister on Kashmir Affairs and Gilgit-Baltistan Qamar Zaman Kaira has urged the United Nations on the occasion of Kashmir Right to Self-Determination Day to ensure the implementation of its resolutions passed for the right of self-determination of Kashmiris.

Thousands of Kashmiris have sacrificed their lives for the great cause, said a press release. He said that today, apart from implementing the resolutions of the United Nations, India is flouting human rights in the occupied valley and not a day passes in Occupied Kashmir when innocent Kashmiri youths are not martyred.

He said that India is trying to achieve its nefarious goals through extrajudicial killings and genocide of Kashmiris.

Adviser on Kashmir Affairs said that all these actions of India are in open violation not only of the United Nations but also of all international laws and the Fourth Geneva Convention.

He urged the United Nations and the international community to take immediate steps to prevent Indian state terrorism in Occupied Kashmir and fulfill their responsibilities to give Kashmiris their right to self-determination.

Qamar said that he will continue to raise his voice for the Kashmiris’ right to self-determination and will not back down even an inch from their support.

He said that Prime Minister Shehbaz Sharif and Foreign Minister Bilawal Bhutto Zardari are fighting for the rights of Kashmiris at all world forums.

He said that India is not paying attention to these efforts and this is the reason why there was a protest against Bilawal Bhutto Zardari in India.

The series of fighting on the forums will continue until the full implementation of the resolutions of the United Nations Security Council for the right of Kashmiris to self-determination. (APP)