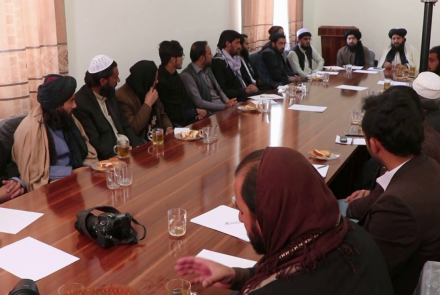 Paktia (ToloNews): A number of journalists in Paktia province on Friday criticized the lack of access to information by officials and said the issue has left a negative impact on their activities.
They said that officials and spokesmen are not providing them with information on time.
“It is the responsibility of officials and relevant organizations to provide accurate and timely information to the media,” said Abdul Rahman Wayand, a reporter. The journalists asked officials to implement their obligation to provide journalists with access to information.
“Some departments are not sharing information in some cases with journalists. We want this problem addressed,” said Habibullah Sarab, a journalist. “We had a meeting with local officials in provinces and they assured us that they will provide us information on matters that are not against the country and national interests,” said Khalid Zahin, a journalist. Local officials in Paktia in a meeting with journalists assured them that they will cooperate with the media regarding access to information.
“If it is in the interest of Islam and our country and does not conflict with the policy of the Islamic Emirate, we will accept the requests that you (journalists) have,” said Inamullah Salahuddin, the deputy governor of Paktia.