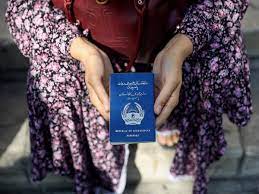 KABUL (TOLOnews): A number of Kabul residents expressed concerns over the longtime stoppage of passports issuance, saying that they have been facing big challenges due to lack of the national documents.
The distribution of passport was stopped three months ago.
“I applied for passport even before the Ramadan, but I have not received it yet. The process of passport distribution has been stopped,” said Sulaiman, a resident of Kabul.
“The distribution of passport should begin, this is the right of every citizen,” said Bilal, a resident of Kabul.
Hamidullah, a passport applicant, said he went to Kabul from the northern province of Balkh to apply for a passport but the process was stopped.
“Some say they have been waiting for one month or 20 days, but I have been waiting for two weeks, and they said my documents have been referred,” he said.
Some the students who are seeking to study overseas have also been unable to receive their passports yet.
“Even if the distribution of passport is allowed for patients and students, it has been very slow progress. I call on the Islamic Emirate to take serious actions in this regard,” Rashid said.
A spokesman for the Department of Passport, Norullah Patman, said that the technical problems within the distribution process have yet to be addressed but efforts are underway to resume passports issuance.
“Efforts are underway in this regard. The reasons for the repeatedly stoppage of passports distribution have been varied,” he said.
The issuance of passports for some certain individuals such as patients and students has been normal.