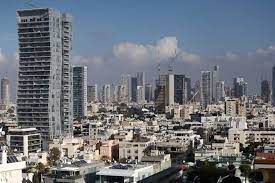 JERUSALEM (AFP): When Israel struck an agreement with the United Arab Emirates to open diplomatic ties in 2020, it brought an electrifying sense of achievement to a country long ostracized in the Middle East.

Officials insisted that Israel’s new ties with the UAE, and soon after with Bahrain, would go beyond governments and become society-wide pacts, stoking mass tourism and friendly exchanges between people long at odds.

But over two years since the breakthrough accords, the expected flood of Gulf Arab tourists to Israel has been little more than a trickle. Although more than half a million Israelis have flocked to oil-rich Abu Dhabi and skyscraper-studded Dubai, just 1,600 Emirati citizens have visited Israel since it lifted coronavirus travel restrictions last year, the Israeli Tourism Ministry told The Associated Press.

The ministry does not know how many Bahrainis have visited Israel because, it said, “the numbers are too small.”

“It’s still a very weird and sensitive situation,” said Mursi Hija, head of the forum for Arabic-speaking tour guides in Israel. “The Emiratis feel like they’ve done something wrong in coming here.”

The lack of Emirati and Bahraini tourists reflects Israel’s long-standing image problem in the Arab world and reveals the limits of the Abraham Accords, experts say.

Even as bilateral trade between Israel and the UAE has exploded from $11.2 million in 2019 to $1.2 billion last year, the popularity of the agreements in the UAE and Bahrain has plummeted since the deals were signed, according to a survey by the Washington Institute for Near East Policy, an American think tank.

In the UAE, support fell to 25 percent from 47 percent in the last two years. In Bahrain, just 20 percent of the population supports the deal, down from 45 percent in 2020. In that time, Israel and Gaza militants fought a devastating war and violence in the occupied West Bank surged to its highest levels in years.

Israeli officials say Gulf Arab tourism to Israel is a missing piece that would move the agreements beyond security and diplomatic ties. Tourist visits from Egypt and Jordan, the first two countries to reach peace with Israel, also are virtually nonexistent.

“We need to encourage (Emiratis) to come for the first time. It’s an important mission,” Amir Hayek, Israeli ambassador to the UAE, told the AP. “We need to promote tourism so people will know each other and understand each other.”

Israeli tourism officials flew to the UAE last month in a marketing push to spread the word that Israel is a safe and attractive destination. The ministry said it’s now pitching Tel Aviv — Israel’s commercial and entertainment hub — as a big draw for Emiratis.

Tour agents say that so far, betting on Jerusalem has backfired. The turmoil of the contested city has turned off Emiratis and Bahrainis, some of whom have faced backlash from Palestinians who see normalization as a betrayal of their cause. The Palestinian struggle for independence from Israel enjoys broad support across the Arab world.

“There’s still a lot of hesitation coming from the Arab world,” said Dan Feferman, director of Sharaka, a group that promotes people-to-people exchanges between Israel and the Arab world. “They expect (Israel) to be a conflict zone, they expect to be discriminated against.” After leading two trips of Bahrainis and Emiratis to Israel, Sharaka struggled to find more Gulf Arab citizens interested in visiting, he said.

When a group of Emirati and Bahraini social media influencers in 2020 visited the Al Aqsa Mosque compound, the third-holiest site in Islam, they were spat on and pelted with shoes in Jerusalem’s Old City, said Hija, their tour guide.

When another group of Emirati officials visited the flashpoint site accompanied by Israeli police, they drew the ire of the grand mufti of Jerusalem, Sheikh Muhammad Ahmad Hussein, who issued a religious edict against Emiratis visiting the mosque under Israeli supervision.

Most Emiratis and Bahrainis who have visited Israel say they forgo their national dress and headscarves in order not to attract attention.

The Islamic Waqf, which administers the mosque, declined to answer questions about the number of Emirati and Bahraini visitors and their treatment at the compound.

Palestinian rage against Emiratis is not confined to the sacred esplanade. Emirati citizens visiting and studying in Israel say they face frequent death threats and online attacks.

“Not everyone can handle the pressure,” said Sumaiiah Almehiri, a 31-year-old Emirati from Dubai studying to be a nurse at the University of Haifa. “I didn’t give into the threats, but fear is preventing a lot of Emiratis from going.”

The fear of anti-Arab racism in Israel can also drive Gulf Arabs away. Israeli police mistakenly arrested two Emirati tourists in Tel Aviv last summer while hunting for a criminal who carried out a drive-by shooting. Some Emiratis have complained on social media about drawing unwanted scrutiny from security officials at Israel’s Ben-Gurion Airport.

“If you bring them here and don’t treat them in a sensitive way, they’ll never come back and tell all their friends to stay away,” Hija said.

Benjamin Netanyahu, who returned for a sixth term as prime minister last week, has pledged to strengthen agreements with Bahrain, Morocco, the UAE and Sudan. Formal ties with Sudan remain elusive in the wake of a military coup and in the absence of a parliament to ratify its US-brokered normalization deal with Israel.

As a chief architect of the accords, Netanyahu also hopes to expand the circle of countries and reach a similar deal with Saudi Arabia.

Yet experts fear his new government — the most ultranationalist and religiously conservative in Israel’s history — could further deter Gulf Arab tourists and even jeopardize the agreements. His government has vowed to expand West Bank settlements and pledged to annex the entire territory, a step that was put on hold as a condition of the initial agreement with the UAE.

“We have a reason to be worried about any deterioration in relations,” said Moran Zaga, an expert in Gulf Arab states at the University of Haifa in Israel.

So far, Gulf Arab governments have offered no reason for concern.

The Emirati ambassador was photographed warmly embracing Itamar Ben-Gvir, one of the coalition’s most radical members, at a national day celebration last month. And over the weekend, the UAE’s leader, Sheikh Mohammed bin Zayed Al Nahyan, called Netanyahu to congratulate him and invite him to visit.

It’s a different story among those who are not in the officialdom.

“I hope that Netanyahu and those with him will not set foot on the land of the Emirates,” Abdulkhaleq Abdulla, a prominent Emirati political scientist, wrote on Twitter. “I think it is appropriate to freeze the Abraham Accords temporarily.”