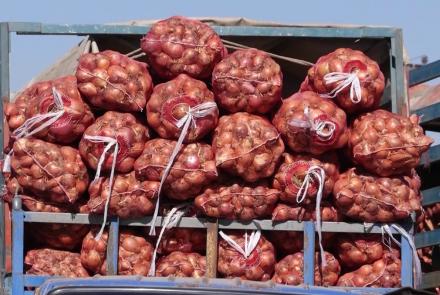 KABUL (TOLOnews): Kabul residents said they are concerned about a sudden rise in onion prices in local markets that they say have increased three times over the past week.
The residents said they cannot afford to pay the high prices. Shopkeepers said the price for seven kilograms of onion is 400 Afs.
“The price of onion is very high. The people are poor and unemployment is rising every day. They cannot afford to buy onions. This has been problematic for the poor people,” said Torialai, a resident of Kabul.
“With my job, everyone knows that I cannot afford to buy onions for 400 Afs. I may be able to buy one kilogram or something like that,” said Barialai, a vendor.
Shopkeepers said the floods flowed across Afghanistan last summer as the reason for the rise in prices of the onions. According to them, the floods have damaged many harvests of onions and other vegetables in the country.
“If they used to take 3,500 kilograms of crops, this year they took 1,400 kilograms. This year, all the onions were damaged due to heavy rains that also caused diseases,” said Abdul Shakur, a shopkeeper.
This comes as the Afghanistan Chamber of Agriculture and Livestock (ACAL) said that Afghanistan’s onion was exported to Pakistan during the current solar year and that it affected the prices.
“The main issue for the rise in onion prices is that Pakistan’s harvest was hit by floods. The demand for onion was high in Pakistan. All onions from Afghanistan were exported to Pakistan but today the demands are high in the market,” said Mirwais Hajizada, the deputy head of the ACAL.
This comes as the Ministry of Industry and Commerce said that efforts are underway to solve the issue of high prices of onions in the country.
Economy Ministry’s spokesman Akhundzada Abdul Salam Jawad said the import of onions from Central Asian countries will increase.
“Onions are brought here from Uzbekistan and Kyrgyzstan because the Salang Pass is closed due to snowfalls. We had the imports of onions from Pakistan but due to the problems which exist now, the imports have faced challenges. The problems will be solved and onion prices will be reduced,” he said.
Based on ACAI statistics, due to the lack of refrigerators, Afghanistan’s products, including onions, are sold at low prices in their seasons but the prices increase in the winter.