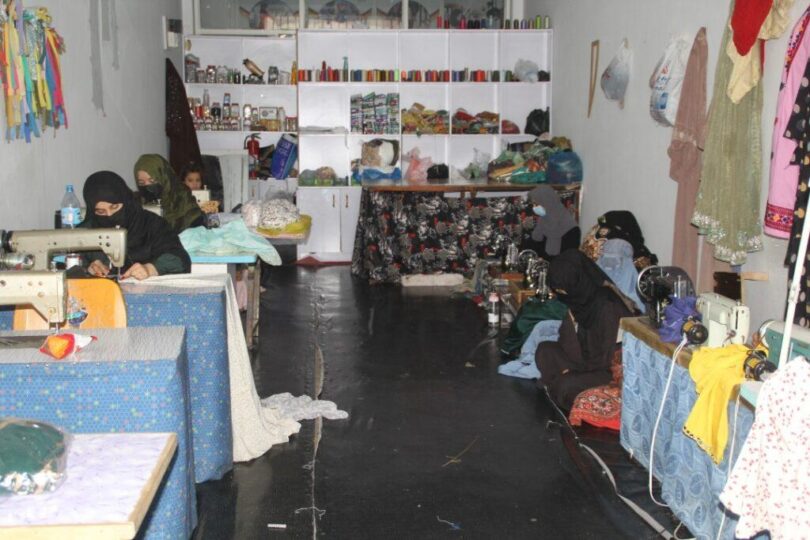 KANDAHAR (Pajhwok): Hundreds of women are rendered jobless after their only business and handicrafts market was shut in Aino Mena township of southern Kandahar province.
The women’s only business market was established with one million US dollars financial assistance of the international community in 2020 and some $250,000 was invested in 37 shops where women ran their businesses. In the market, 250 businesswomen were directly and hundreds of other women indirectly involved in producing and selling handicrafts and most of them were guardians of their families. The market was recently closed by the authorities after banning women from working in non-governmental organizations, attending university and high schools.
Feroza, a tailor at the market, told Pajhwok Afghan News the marked was their only place where they could produce and sell handicrafts, but unfortunately it was also closed.
“A group of Taliban came on Saturday and told us to collect your items and not to come to the market again, we did not know from where they came and on whose orders they closed the market,” Feroza said.
Feroza was annoyed by this decision and said the market was like their house where only ladies were doing their business and their customers were also females and males were not allowed to enter the market, but still it was closed for them.
These businesswomen supported their families by producing women’s clothes, hijabs, curtains and other decoration items.
Another shopkeeper of the market on the condition of anonymity told Pajhwok Afghan News that her husband was killed in the war four years ago. A mother of four daughters, she had to work and find food for her family. “I would find some food for my family here and run our life with it, what should we do now? There is no job opportunity at the houses of the people, I searched a lot, I don’t know what to do?” she said.
Zarmina is another woman who had created work opportunities for 30 other women in tailoring shops and she was selling their tailored handicrafts. Zarmina told Pajhwok: “The women’s market was the only place from where our handicrafts were sent to other provinces or abroad, but now the women are sewing and embroidering items at their houses and shopkeepers buy their products at throwaway prices”.
Besides these women, girls deprived of education were also busy learning tailoring and embroidery work and working in beauty parlor shops and some other businesses in the market.
Aziza, a 12th grade student whose school has been closed since March, was learning tailoring in the women only market.
“My school was closed when I was studying in grade 12, so I wanted to learn tailoring as a profession because I lost my hope for the school to be opened again, now the market is also closed.”
These women asked the officials to rethink about their decision and reopen their market, so they could work and find some food for their families. Meanwhile, Kandahar chamber of commerce and industries officials said there were multiple economic problems in the country, therefore legal businesses must be allowed that played a positive role in the economy of the country.
Sayed Sarwar Amani, head of the chamber, told Pajhwok all legal businesses where widows and orphans earned legitimate bread must be allowed. “The big problem we face is economic problem, we must support businesses where widows and orphaned children win their daily bread,” Amani said.
Pajhwok tried to seek the comment of officials of the Public Works and Social Affairs Department, but did not succeed.
Haji Zaid, spokesperson for the provincial governor, told Pajhwok he would get information about how the market was closed.
Zaid did not provide information who closed the market and who prevented the women from working in the market. After banning them from high schools and universities, restrictions on women to work have increased, drawing reactions on domestic and international levels.
The people say women comprise half of the Afghan society and depriving them of their right to education and work has confronted many families with various problems.