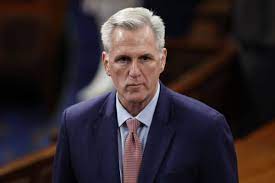 WASHINGTON (Reuters): US Representative Kevin McCarthy struggled to beat back hardline conservative opposition and secure enough votes to give him the speakership when the new House of Representatives convenes with a narrow Republican majority on Tuesday.

After a poorer-than-expected showing in the November midterm elections, McCarthy’s fellow Republicans have been embroiled in a public brawl over who should lead their party once it assumes control of the House.

A group of hardline conservatives oppose McCarthy’s candidacy, concerned that he is less deeply vested in the culture wars and partisan rivalries that have dominated the House and even more so since Donald Trump’s White House years.

They have criticised the California Republican for not taking a more aggressive stance against Democrats, who under Speaker Nancy Pelosi had been in control, on priorities including government funding, defence and border security.

Representative Bob Good is one of five Republican lawmakers who have said they would not back McCarthy.

“I won’t be voting for Kevin McCarthy tomorrow. He’s part of the problem. He’s not part of the solution,” Good told Fox News on Monday. “There’s nothing that indicates to me that he’s going to change his pattern since he’s been in leadership, where he’s part of the swamp cartel.”

With a narrow 222-213 Republican majority, McCarthy can afford to lose just four votes from his caucus to win the 218 he needs, or more than half of the chamber’s 435 members.

No Democrats are likely to vote for him. But some in McCarthy’s party have proposed reaching across the aisle to gain support for an unidentified Republican candidate, if hard-liners refuse to relent in their opposition.

Asked if he had the votes as he walked through the US Capitol on Monday, McCarthy told reporters, “I think we’re going to have a good day tomorrow.”

McCarthy later held meetings with opponents and supporters. A source familiar with the situation said afterwards that lawmakers prepared to vote against him still numbered in the double digits.

House Republicans are expected to meet face-to-face behind closed doors on Tuesday morning, hours before the speaker election.

The speaker will set the House legislative agenda during a period of divided government in Washington, with President Joe Biden’s Democrats retaining the White House and Senate. The power struggle could undermine House Republicans’ hopes of moving forward quickly on investigations into Biden’s administration and family.

McCarthy, the House minority leader, who was nominated for the speakership in November by 188 of his fellow Republicans, made some concessions over the weekend but they did not go far enough for some.

A New Year’s Day letter from nine unsatisfied conservative Republican lawmakers, posted on Twitter, said “there continue to be missing specific commitments with respect to virtually every component of our entreaties.”

The letter also said “the times call for radical departure from the status quo — not a continuation of past, and ongoing, Republican failures.”