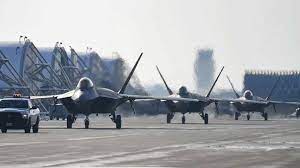 SEOUL (Reuters): South Korea and the United States are discussing joint planning and implementation of US nuclear operations to counter North Korea, Seoul’s presidential office said on Tuesday, although US President Joe Biden said there would be no joint nuclear exercises.

The statement came shortly after Biden said the United States was not discussing joint nuclear exercises with South Korea, seeming to contradict earlier remarks by South Korean President Yoon Suk-yeol in an interview with a local newspaper.

Yoon’s press secretary, Kim Eun-hye, said Biden “had no choice but to say ‘No’” because he was simply asked if the two countries were “discussing nuclear war games,” whereas joint nuclear exercises can only be held between nuclear weapons states.

“In order to respond to the North Korean nuclear weapons, the two countries are discussing ways to share information on the operation of U.S.-owned nuclear assets, and joint planning and joint execution of them accordingly,” Kim said in a statement.

A senior U.S. administration official reiterated Biden’s comment, saying that joint nuclear exercises with Seoul would be “extremely difficult” because Seoul is not a nuclear power, but that the allies are looking at enhanced information sharing, joint contingency planning and an eventual tabletop exercise.

Both presidents have asked their teams, after a meeting in Cambodia in November, to explore ways to address North Korea’s recent actions and statements, which have caused “increasing concern,” the official said.

“This is going to be done through a variety of ways, including as President Yoon said, through enhanced information sharing, joint planning and expanding the range of contingencies that we plan for, as well as training, and with the idea eventually leading up to a tabletop exercise,” the official told Reuters.

Neither side has finalised the timing of the planned tabletop exercises, but they would take place “in the not-too-distant future” and cover scenarios beyond nuclear situations, the official said.

“The idea is to also try and make sure that we’re able to fully think through the range of possibilities based on the DPRK capabilities which they’ve demonstrated, as well as their statements,” the official added, using North Korea’s official name, the Democratic People’s Republic of Korea.

A National Security Council spokesperson said in a statement that the United States is committed to providing extended deterrence, and that the allies are working on “an effective coordinated response to a range of scenarios, including nuclear use by North Korea.”