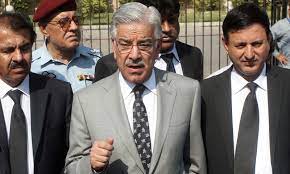 The defence minister was addressing the PML-N workers’ convention in Sialkot on Sunday.

He said he wanted to felicitate nation on the Quaid-e-Azam’s birth anniversary and wished the Christian community on their Christmas festivities.

He also congratulated PML-N supremo Nawaz Sharif on his birthday praying to Allah for his long life.

Kh Asif said that nowadays the political fight is going on social media. He, however, said that one should not lose patience.

He said nobody would be allowed to play with the security of country and property of the people.

He said the Muslim League was the party which made Pakistan.

He said that they did not believe in using swearing words. ‘We do not use foul language against anyone, he added.