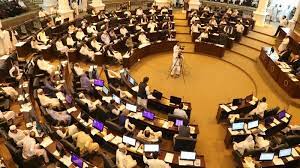 PESHAWAR (APP): The Khyber Pakhtunkhwa Assembly on Monday passed the most discussed and eyebrow raising “aircraft, helicopter bill” that allows the use of aircraft or helicopters by functionaries of the government at public expenses amid opposition protest and criticism.
The opposition tried all its best to resist passage of the bill and staged a protest in front of speaker dice demanding further discussion on it in the relevant standing committee, but to no use. Minister for Labour Shaukat Yousafzai moved the bill in the House with Speaker Mushtaq Ahmad Ghani in the chair.
Inayatullah Khan of Jamaat-e-Islami said that the bill would allow everyone to use the aircraft, helicopter at public expenses like a ‘Raksha’, adding that the passing of such would have adverse effects in future. He said that the provincial government should discuss it with the law department and Advocate General.
Ikhtiar Wali of PMLN said that the provincial government should pass the law for the welfare of the 40 million population of the province rather for PTI and their blueeyed. He said that the province was already indebt of Rs1000 billion and the government intended not to be questioned about the illegal expenses of billions of rupees incurred on helicopters sice 2008 at any stage now and in future.
Parliamentary Leader of ANP, Sardar Hussain Babak said that the opposition would request Khyber Pakhtunkhwa Government to reconsider the bill and reject it as the opposition parties have severe reservations over it. Meanwhile the opposition members chanted slogans against the PTI provincial government and shouted “Shame, Shame” and “PTI seeking NRO”. The PTI government had tabled legislative bill in the provincial legislature to allow the use of aircraft or helicopters by the functionaries of the government at public expenses. The piece of legislation named KP Ministers (Salaries, Allowances and Privileges) (Second Amendment) Bill, 2022 was introduced in the House last week.
Under the bill, the Chief Minister could hire an aircraft or helicopter from the open market or from Pakistan Army, Pakistan Air Force or Federal Government for official use, at public expenses. Similarly, the proposed legislation empowers the Chief Minister to allow any Minister, Advisor or Special Assistant to Chief Minister, public servant or government servant to utilize the facility at public expenses.
Any aircraft or helicopter of Government, subject to availability and with the prior approval of the Chief Minister, be used for private purposes on payment of charges, at the rate determined by Government from time to time,” it further added. “While using any aircraft or helicopter, the Chief Minister, a Minister, Advisor or Special Assistant to Chief Minister, a public servant or Government servant, could be accompanied by and fly along with his support staff, aides and all other individuals, which he would deem necessary for such air journey or excursion”.
The bill validates all the official journeys and excursions, carried out and undertaken on any aircraft or helicopter of Government, by the Chief Minister, any Minister, Advisor or Special Assistant to Chief Minister, public servant or Government servant, or any of his support staff, aides, any other individual, on and from November 1, 2008 till the commencement of the KP Ministers (Salaries, Allowances and Privileges) (Second Amendment) Act, 2022 and could not be questioned for want of any deficiency of procedure or approval, as the case might be.
Meanwhile, the KP Regularization of Services of Project Employees of the Directorate General Livestock and Dairy Development (Extension) of Erstwhile Federally Administered Tribal Areas Bill, 2022 were also passed in the House moved by Minister for Labour Shaukat Yousafzai. Later, the Speaker adjourned the assembly proceedings till Tuesday 1400 hours.