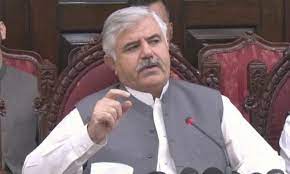 PESHAWAR: Chief Minister Khyber Pakhtunkhwa Mahmood Khan has said that the Khyber Pakhtunkhwa assembly will be dissolved as and when green signal is received from the party chairman Imran Khan. He said that the prevailing economic crisis and unprecedented inflation in the country is because of the imported setup at the federal level which has played havoc with the national economy.

While addressing the oath taking ceremony of the newly elected cabinet and governing body of Peshawar Press Club, the Chief Minister strongly condemned the terrorist attack on Police Station Sarband and termed it a heinous crime against humanity. He clarified that the provincial police force is fighting on the front line. The entire nation stands with its police force who have rendered numerous sacrifices for the establishment of peace. He strongly criticized the Federal Minister for interior for his ridiculous statements against Khyber Pakhtunkhwa police adding that the incumbent federal cabinet is involved in the heart wrenching incident of Model Town, Lahore and have FIRs registered against them.

Regarding the steering committee notified by the incumbent federal government, Mahmood Khan termed the step as unconstitutional and baseless having no legal ground after the 25th constitutional amendment. Appointment of a Civil Servant as its chairman and the Governor as its member is incomprehensible.

He clarified that the notification will be challenged at every level as it is tantamount to usurping the rights of the province. The entire development planning and identification of projects under the Accelerated Implementation Program (AIP) has been carried out by the provincial government. However, the current federal government is hesitant in provision of funds for their immoral political motives and have put to the wind all legal and constitutional obligations.

He lamented the federal government for not providing the budgeted funds of Khyber Pakhtunkhwa province adding that huge funds are being provided to MNAs who are part of PDM under the Sustainable Development Goals. Out of the allocated Rs 55 Billion development budget for the merged districts, only Rs 5 Billion have been provided so far which is a clear violation of the rights of Khyber Pakhtunkhwa province. Currently, the provincial government is paying salaries and Sehat card funds, of the merged districts, from its own kitty.

The Chief Minister maintained that the imported federal cabinet does not have public confidence and even international donors are hesitant in providing donations. Commenting on the wheat situation in the province, Mahmood Khan clarified that the annual requirement of Khyber Pakhtunkhwa province is 50 Lakh metric tons out of which the provincial produce is only 12 lakh metric tons. Rising of wheat prices in other provinces has automatically increased flour prices.

However, the provincial government has increased its daily quota of subsidized wheat to flour mills from 5,000 metric tons to 6500 metric tons which will help substantially in regulating wheat prices. Moreover, the provincial government is also providing subsidy to the tune of Rs 35 billion on wheat for provision of cheap flour to its consumers. The ceremony was also attended by Minister for Higher Education Kamran Bangash, Special Assistant to Chief Minister on Information Barrister Muhammad Ali Saif, Secretary Information Arshad Khan, Director General Information Imdadullah and others.