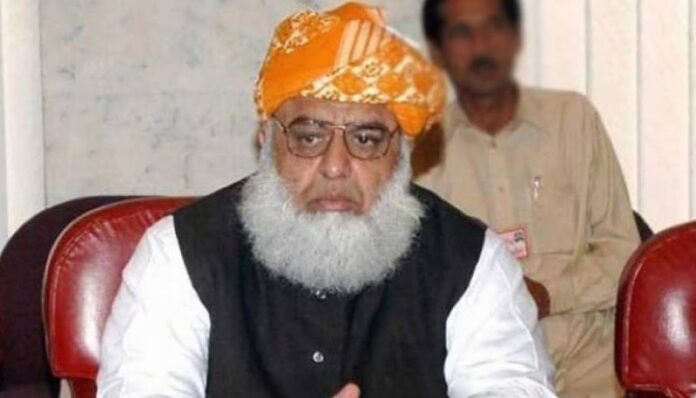 F.P. Report
PESHAWAR: Khyber Pakhtunkhwa Cabinet in its meeting held here on Tuesday with Chief Minister Mahmood Khan in the chair strongly condemned PDM president Maulana Fazlur Rahman for his statement with regard to advocating the stoppage of funds to Khyber Pakhtunkhwa province and declared that such statements and acts by Maulana tantamount to enmity with the people of this province.
The meeting besides the cabinet members was also attended by the Provincial Chief Secretary, Senior Member Board of Revenue and Administrative Secretaries of various government departments. The cabinet took strong exception to the deprecatory statement of Maulana Fazlur Rahman and termed it disrespectful to an elected government. Such actions on the part of Maulana has unveiled his real face in front of the masses, observed the cabinet.
Addressing the meeting, the Chief Minister Mahmood Khan directed the Finance Department to approve the SNEs for all the completed schemes in the province within a week time and meetings be convened with all the relevant departments forthwith, so that the benefits of the schemes could reach the masses. He also directed implementation of the E-Tendering for schemes and said that he would soon formally inaugurate the process.
The cabinet approved the formation of a sub-committee to be headed by the Food Minister and comprising of Finance Minister, Local Government Minister and other relevant authorities as its members to fix rates for wheat. The cabinet also deliberated upon the hardships faced by the consumers due to closure of CNG stations in the province and the Chief Minister assured that he will take the matter with the quarters concerned to provide relief to the masses.
The cabinet also approved the proposal with regard to declaring Peshawar and Termiz Uzbekistan as Sister Cities and authorized the Mayor/ Administrator of the Capital Metropolitan Government Peshawar to sign the Model Sister City Agreement with Termiz Uzbekistan in this regard.
The cabinet accorded approval to the amendments in the Khyber Pakhtunkhwa Village Council and Neighbourhood Council Rules of Business 2022. According to the amendments, the remuneration of the Tehsil Mayors and Chairmen have been enhanced and Pol @200 liters per month have been fixed.
The cabinet further approved the Khyber Pakhtunkhwa Domestic Violence Against Women (Prevention and Protection) Rules, 2022 to prevent and protect women from violence at their working and living places as guaranteed under the Constitution of the Islamic Republic of Pakistan. The cabinet also granted ex-post facto approval to the charges incurred on fuel, transportation and other allied matters/expenditures for carrying out relief activities and survey process in various areas of the province affected by the recent monsoon rains and floods. Emergency was declared in various flood affected areas of the province by the Relief, Rehabilitation & Settlement Department under Section 16 (A) (1) of the National Disaster Management (Khyber Pakhtunkhwa) (Amendment) Act, 2019 upon the request(s) of the concerned District Administration and recommendation of the PDMA.
The cabinet also approved the establishment of Sessions Divisions and Civil Divisions in the newly-bifurcated districts of Upper South Waziristan and Lower South Waziristan. The Court of Sessions shall be holding sittings in Spinkai Raghazai and Wanna in Upper South Waziristan and Lower South Waziristan Districts respectively. Similarly, the Civil Courts will also be holding sittings in Spinkai Raghazai and Wanna in Upper South Waziristan and Lower South Waziristan Districts respectively.
The cabinet also approved the transfer of state land measuring 01 kanal and 07 marlas in mouza Miandam, Tehsil Khwazakhela, District Swat to Elementary & Secondary Education Department for expansion of GHSS Miandam District, Swat.