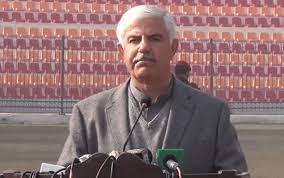 A ceremony in this regard was held at the Chief Minister’s House in which the Chief Minister handed over the machinery to WSSP, purchased at a cost of Rs 413.5 million for 11 new semi-urban union councils which have recently been included in the WSSP domain. The newly purchased solid waste machinery includes 33 mini dumpers, 55 containers, 16 tractors and trolleys, 11 arm rolls, 4 FE loaders, and 4 excavators. Moreover, the eleven new semi-urban union councils of district Peshawar added to the WSSP domain include Achini Bala, Chamkani, Larama, Pajjagi, Pakha Ghulam, Pushtakhara Payan, Regi, Sarband, Sufaid Dheri, Wadpaga and Mera Kachori.

Speaking on this occasion, the Chief Minister said that the provincial government is committed to improving the sanitation facilities throughout the province and concrete steps are being taken for the purpose. He stated that the incumbent provincial government has launched Khyber Pakhtunkhwa Cities Improvement project worth Rs 97 billion rupees for provision of clean drinking water, construction of parks and recreational facilities, establishment of sewerage treatment plants and provision of other civic facilities to people in five divisional headquarters of the province.

The said project on completion will prove to be an important milestone in providing the best civic services and recreational facilities for citizens. The provincial government is spending huge resources on improving service delivery across the province and to ensure easy and equal access of all citizens to services, he concluded.