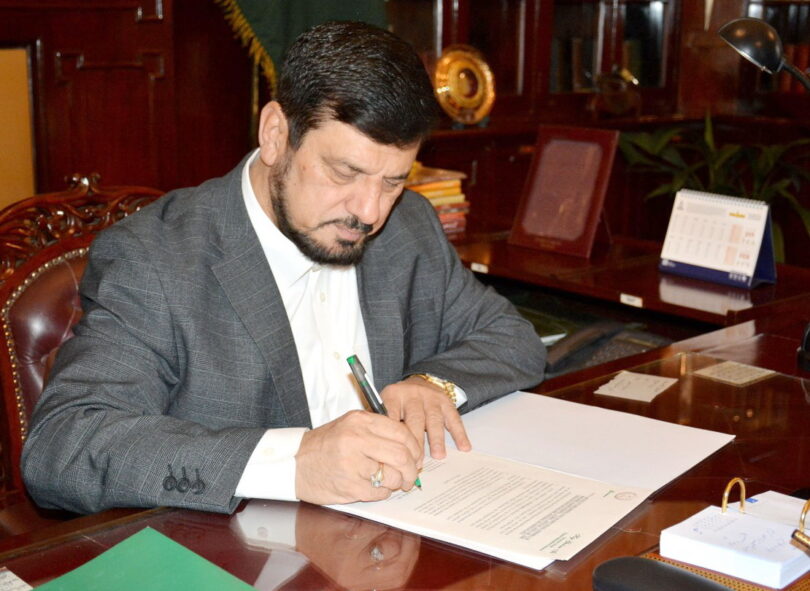 Unlike his counterpart in Punjab, KP Governor Haji Ghulam Ali signed the summary of assembly dissolution well before the expiry of stipulated time. Whereas Punjab Governor Balighur Rehman, who had also received the assembly dissolution summary by Punjab Chief Minister Ch Pervaiz Elahi, did not sign it, letting it dissolve on its own on Saturday night after an expiry of 48 hours.

According to the notification issued by the Governor’s House, Peshawar today, “Governor Haji Ghulam Ali under Clause (1) of Article 112 of the Constitution of Pakistan dissolves the Provincial Assembly of Khyber Pakhtunkhwa with immediate effect. Henceforth, the Provincial Cabinet also stands dissolved.”

KP Chief Minister Mahmood Khan on Tuesday night advised KP Governor Haji Ghulam Ali to dissolve the provincial assembly. In the summary sent to the governor, the chief minister wrote that he was sending the advice in pursuant to Article 112(1) of the Constitution of the Islamic Republic of Pakistan. As per the constitution, the Governor is bound to sign the summary within 48 hours and if he chooses to not sign it, the assembly dissolves automatically without the governor’s assent.

Meanwhile, talking to the media here on the lawn of the Governor House on Wednesday, the Governor Khyber Pakhtunkhwa has said that instead of wasting two days, he has signed the advice of the Chief Minister for dissolution of the provincial assembly with immediate effect.

He said that the purpose of his immediate signing of the summary was to save the nation from two days of confusion and prevent the mention of my name in the wastage of time.

The Governor Pakhtunkhwa had arranged a special reception for orphans and persons with disabilities on the green lawn of the Governor House. About 2000 from various orphanage houses and other organizations attended the reception. A large number of people including political workers, businessmen and senior officers of the civil bureaucracy also attended the function.

The Governor said that the economic conditions of the country are not in good condition as we are facing economic and political challenges. Therefore, he said that since he has taken oath of his office, he is calling for developing consensus to take the province forward according to our customs and traditions. But, the whole country has witnessed that a political party is following a single point agenda of how to create anarchy in the country and aggravate both political and economic situations and create hurdles in bringing improvement in them.

Haji Ghulam Ali said that as now the provincial assembly has been dissolved as per wish of a particular political party, then today he is appealing to the nation particularly to youth, general public and all segments of the society to keep into consideration who had brought the country to the current situation.