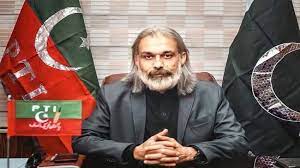 F.P. Report
PESHAWAR: Provincial Minister for Local Government, Elections and Rural Development Sardar Faisal Amin Gandapur has strongly rejected the so-called steering committee established by the federal government for using development funds in the merged districts of Khyber Pakhtunkhwa, calling it completely unconstitutional and blatant interference in provincial affairs. He regretted that the imported government sitting in Islamabad, after destroying the entire country’s economy, is not stopping from its hypocritic politics, looting public money and pursuing anti-nation agenda.
Sardar Faisal Amin in an informal conversation with media representatives in Peshawar on Sunday, further said that if the central government really wants to show sympathy to the people of the merged districts, it should immediately return the right of fifty billion rupees to them, which it has usurped, and despite all our efforts, out of the 55 billion rupees of AIP budget of former FATA, only 5 billion rupees were provided, which is like cumin in the camel’s mouth, he added.
“Regrettably, health card funds of four and a half billion rupees also have been stopped of the merged districts whereas a significant cut of about five and a half billion rupees in the salary funds of ex-FATA employees has been imposed, which has also no guarantee from the center next month”, he maintained adding that provincial government had to forthwith bridge all these financial difficulties and compensate them at the very cost of the people of the rest of the province because all these tribals are our brethren and the people here cannot even imagine leaving them alone.
Faisal Amin Gandapur strongly condemned the negative role of Governor Haji Ghulam Ali in this context and said that as a representative of the federation, he should voice for the usurped funds of ex-FATA from the center instead of interfering in the affairs of the provincial government. He said our chief minister Mahmood Khan is right to say that the governor is just a puppet of the usurping government who has been apparently entrusted with the mission of spoiling the economic affairs of this province instead of improving it.
The Minister said that the ex-FATA employees’ salaries have been reduced by 50 to 75 million rupees and this reduction has also to be met by the provincial government’s kitty.
Faisal Amin Gandapur demanded of the federal government to withdraw this notification immediately and instead release fifty billion rupees of the AIP budget. He however expressed the hope that despite the decision to leave the government and dissolve the provincial assembly, we are still worried about the people. l, hence the KP governor, for the sake of the zealous people of the province, especially the merged districts, will also add his voice to our voice and talk about the transfer of AIP funds from the federation so that the province and the people can be taken out of the quagmire of economic challenge and their future could be made bright, he concluded.