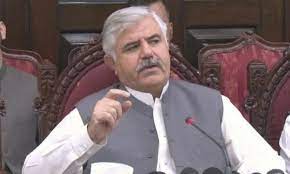 F.P. Report
PESHAWAR: Chief Minister Khyber Pakhtunkhwa Mahmood Khan has said that the provincial government has taken concrete steps to enhance quality agricultural produce to ensure food security in the province.
Presiding over a meeting regarding Agricultural University Swat here on Sunday, he termed the establishment of agriculture university in Swat, a flagship project of the provincial government, which will not only promote modern education and research in the agricultural sector, but will also increase the value and quality of agricultural products in the region and create employment opportunities for the people.
He added that Chashma Right Bank Lift Canal project is also an important achievement of the incumbent government, which on completion will bring hundreds of thousands acres of barren land under cultivation in the southern districts.
The Chief Minister directed the quarters concerned to transfer all the assets of Agriculture University Peshawar’s sub-campus Swat to the newly established University of Agriculture Swat without any delay and said that concerted efforts be made for its operationalization.
The meeting also made a threadbare discussion on the procedure for the transfer of assets from one university to another.
Addressing the participants, the chief minister said that agriculture university Swat is of great importance not only for Swat but for the entire Malakand division, which will help to promote agriculture, horticulture, fisheries and other sectors in the region through modern education and research.
The Chief Minister further said that the establishment of this university is the need of the hour to make the province self-sufficient in agriculture.
It is pertinent to mention here that 94 projects of agriculture and livestock sector have been reflected in the current annual development program including 72 ongoing and 22 new projects.
The total cost of these projects is over 1 trillion and 15 billion rupees. Some of these projects include agriculture transformation plan, establishment of seed industry in the province, enhancement of wheat production in the province, establishment of agriculture complex, development of Gomal Zam Dam Command Area, provision of interest-free loans to farmers under Gomal Zam Dam Command Area Project, upgradation of Agricultural Research Institutes into Centers of Excellence etc. The chief minister said that food security is one of the priority areas of the government and projects worth billions of rupees have been launched to this end.
Secretary Agriculture Israr Khan, Secretary Higher Education Daud Khan, Commissioner Malakand Division Shaukat Ali Yousafzai, Vice Chancellor University of Agriculture Peshawar Professor Dr. Jahan Bakht and other relevant officials attended the meeting.