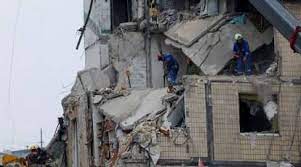 MOSCOW (Reuters): The Kremlin said on Monday that Russian forces did not target residential buildings in its missile strike against Ukraine, two days after a Russian missile hit an apartment complex in Dnipro, in an attack that Kyiv says killed more than 30 civilians

Kremlin spokesman Dmitry Peskov said the “situation” in Dnipro was the result of Ukrainian counter-missiles and air defense.