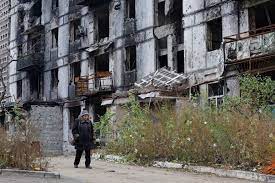 KYIV (Agencies): The explosion Ulvi Zulfili witnessed in the southern Ukrainian city of Mariupol made him stutter for days. In mid-March, hundreds of civilians, including children, thronged the basement of Mariupol’s drama theatre, hiding from incessant Russian shelling that was killing hundreds of people a day. Even though two signs saying “children” had been drawn in metres-long letters near the theatre, a Russian fighter jet bombed it on March 16.
As many as 600 people were killed, according to Ukrainian officials and media reports. Russia denied carrying out the attack, saying Kyiv staged it from within the building. On that gloomy, cold morning, Zulfili biked to downtown Mariupol to look for formula for his friend’s newborn son, whose stressed-out mother was unable to produce breast milk.
He saw how the white theatre with marble columns was hit by a cruise missile. A mushroom of smoke and dust rose up twice as high as the nearby supermarket. He was transfixed by horror – and could not hear a sound.
“The strangest moment was when you see a picture but don’t hear it,” the 26-year-old told Al Jazeera. “You can’t understand whether you’re alive or not.” “In a moment, the sound reaches you with the blast wave. It almost rips the clothes off you. And you understand that you are alive and need to run away,” he said in a cafeteria, now safe and sound in Kyiv. Days after Al Jazeera interviewed him mid-December, Mariupol’s Moscow-installed authorities razed what remained of the theatre.
Zulfili’s stutter is now gone, but so is the life he lived in Mariupol. He arrived there from Azerbaijan at age four and can still recall moments of his early childhood – “riding a horsie” and seeing oil derricks that made his South Caucasus homeland one of the world’s oldest oil producers. But his father, Elshad, did not want his son to grow up and die in the war that scarred Azerbaijan. In the early 1990s, a conflict over Nagorno-Karabakh, an Armenian-dominated enclave in Azerbaijan, became the first open war between two former Soviet republics.
Russia declared itself Armenia’s “protector” and brokered a truce in 1994. But almost yearly border fighting kept interrupting one of the ex-USSR’s “frozen conflicts”. Elshad Zulfili opened a grocery store in Mariupol, a city of 500,000 people that seemed like a tranquil backwater west of the Russian border. The Azov Sea port was dominated by two mammoth steel factories, which employed tens of thousands of people and filled the city with smoke.