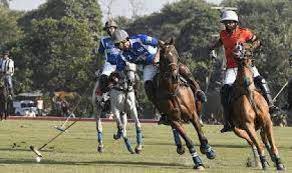 LAHORE (APP): Salam Polo and Diamond Paints/Sheikhoo Steel registered victories in the Coca-Cola Lahore Open Polo Championship 2022 here at the Lahore Polo Club ground on Sunday.
Sensational Nocolas Ruiz Guinazu steered Salam Polo to an emphatic 8-4 victory over Zacky Farms/Kalabagh in the first match of the day. Guinazu played the hero’s role from Salam Polo by smashing in superb five goals while he was ably assisted by Hashim Kamal Agha, Raja Arslan Najeeb and Hamza Ali Hakeem ? all converted one goal apiece. On the other hand, Raja Jalal Arsalan fired in all the four goals for Zacky Farms/Kalabagh. Team Salam Polo dominated the match right from the word go as they cracked a classic quartet in the first chukker against one goal by Zacky Farms/Kalabagh to gain a healthy 4-1 lead. The second chukker was evenly poised as both the sides scored one goal apiece with Salam Polo still enjoying 5-2 lead. The third chukker was fully dominated by Salam Polo team as they banged in a superb brace to further enhance their lead to 7-2 while in the fourth and last chukker, Salam Polo though struck one goal to further stretch their lead to 8-2 yet Zacky Farms/Kalabagh played better polo and thrashed in two back-to-back goals but it proved too little too late for them, as they lost the crucial match by 4-8. Jhon Fisher and Col Omer Minhas (R) officiated the match as field umpires.
Nicolas Antinori excelled in Diamond Paints/Sheikhoo Steel’s 8-6 triumph over Guard Rice in the second match of the day. Antinori stole the show from the winning side by displaying excellent mallet and pony skills and firing in five fantastic goals while his teammates Omar Asjad Malhi banged in a beautiful brace and Mir Huzaifa Ahmed struck one goal. On the other hand, Taimur Ali Malik hammered a hat-trick while Saqib Khan Khakwani, Shaukat Ali Malik and Muhammad Ali Malik converted one goal apiece from Team Guard Rice. Diamond Paints/Sheikhoo Steel were off to a flying start as they thrashed in three back-to-back goals to take 3-1 lead in the first chukker. Guard Rice made a good comeback in the second chukker, as they also hammered an impressive hat-trick to equalize the score at 3-3. Just before the end of the second chukker, Diamond Paints struck one goal to get back a slight 4-3 lead. The third chukker was then saw the dominance of Diamond Paints as they cracked a classic quartet to take a huge lead of 8-3 while Guard Rice converted one to reduce the margin to 8-4. The fourth and last chukker was though dominated by Guard Rice as they added two more goals in their tally but it was too little too late as they lost the match by 6-8. Jhon Fisher and Manuel Carranza supervised the match as field umpires.