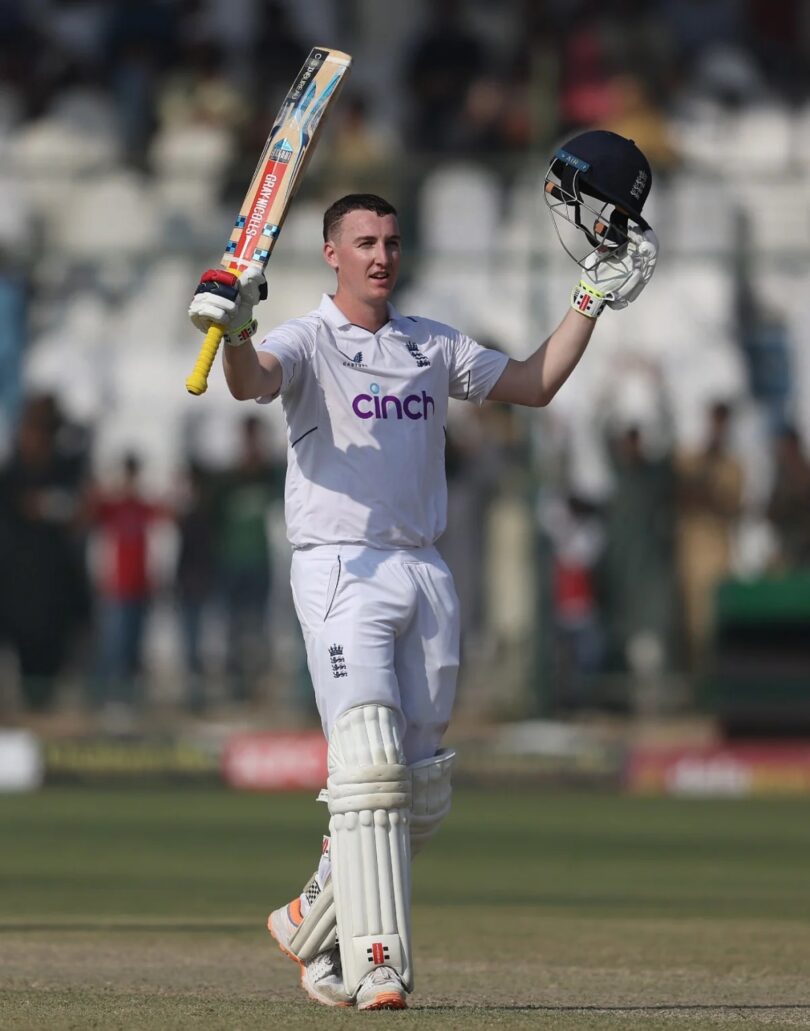 KARACHI (Monitoring Desk): Harry Brook continued his remarkable series to rebuild England’s innings with his third century in as many Tests after Pakistan had the visitors pinned down on the second day of the final match in Karachi on Sunday.
England took an improbable 50-run lead on the back of Brook’s innings before they were bowled out for 354 and Pakistan cut the deficit to 29 at the close of play.
Pakistan’s openers Abdullah Shafique and Shan Masood were batting on 14 and 3, respectively with the home side ending the day on 21 for no loss.
Brook’s 111 revived England’s chances of becoming the first team ever to clinch a 3-0 series sweep in Pakistan after the visitors were teetering at 145-5. England lead the three-match series 2-0 after a 74-run win in Rawalpindi and a close-fought 26-run victory in Multan.
After Pakistan’s spinners knocked over the English top-order, Brook and wicketkeeper Ben Foakes amassed 117 for the sixth wicket, and brought England within touching distance of Pakistan’s first innings total of 304.
The 23-year-old Brook drove spinner Abrar Ahmed for his eighth boundary to reach his third career hundred following up his 153 in the first Test and 108 in the next.
In all Brook cracked eight fours and three sixes before he was trapped leg before to become debutant pacer Mohammad Wasim’s first Test wicket. Brook has now scored 468 runs — beating David Gower’s 449 in 1984 — for the highest series total by an England batter in Pakistan.
He also equalled Mohammad Yousuf’s record of three hundreds in successive matches in an overseas series – in Test matches between England and Pakistan. Yousuf hit three centuries in England in 2006. Pakistan’s spinners Noman Ali and Abrar Ahmed had England in a tight spot after the first session. The duo finished with 4-126 and 4-150, respectively. Brook revealed he told a friend he will score two hundreds in Pakistan.
“I said to one of my mates (before the tour) I’d like to get two before I got here, so it feels very nice to go one better,” said Brook who was part of Pakistan Super League winners Lahore earlier this year.
Brook praised his partner Foakes. “Ben (Foakes) didn’t look like he was going to get out. We just knocked it around for as long as we could. We were just trying to build a partnership.”
“We will do our best to bowl them (Pakistan) out.” Noman hoped Pakistan can still pull off a consolatory win. “We still have a good chance because they have to play the fourth innings,” said Noman.
“If we give them a 200-250 target then we have a good chance because there will be turn and low bounce in the coming days.”
England were struggling at 145-5 soon after lunch after Ben Stokes (26) attempted a third run which Brook turned down only to see his skipper stranded.
After Brook fell, Foakes added another 51 alongside Mark Wood for the seventh wicket. Noman then dismissed Foakes and Rehan Ahmed (one) while Ahmed accounted for Wood and Ollie Robinson for 29.
In the morning session, Noman removed Ben Duckett and Joe Root off successive deliveries.
With the National Bank Cricket Arena pitch offering turn, left-armer Noman trapped Duckett (26) leg before and had the experienced Root caught low in the slip by Salman Ali Agha for nought. Pope stood firm amidst the dual wicket fall, reaching his 11th fifty before he was bowled for 51 by Ahmed, who added to the wicket he took on Saturday.