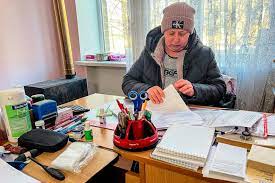 Bakhmut (AFP): At a health center in the frontline Ukraine city of Bakhmut, doctor Elena Molchanova ushers patients into a narrow office warmed by a wood-burning stove, where she hands out medication and fills in death certificates.

Sometimes her visitors — the last remaining residents in the town shelled daily and cut from essential services — are just seeking shelter from the biting cold.

The 40-year-old doctor is one of just five left in Bakhmut who are now a lifeline to the some 8,000 people local officials say are still in the city.

Bakhmut has been at the heart of a grinding fight between Russian and Ukrainian forces in the past few months in Ukraine’s eastern Donetsk region that Moscow wants to control fully.

When the city was bustling with its pre-war population of some 70,000, the hallways of Molchanova’s clinic were lit, the toilet running and the welcome desk staffed.

Now, she keeps to the one office, with haphazard stacks of medical equipment, sacks of potatoes and papers piled around her.

She worries the large window behind her desk could shatter if one of the shells crashing around the city hits too close.

But she has no plan to leave.

“When I enrolled in medical school, I took the Hippocratic oath, and I cannot betray these people,” she told AFP.

“They come here for medical care, and we provide it the best we can.”

Many of those still living in the midst of fighting in Bakhmut and the nearby town of Soledar — described by a top Ukrainian official the “bloodiest” since Russia invaded last February — are elderly or have disabilities.

Molchanova said the availability of medication and equipment, especially for psychiatric issues or chronic conditions like diabetes, is sporadic at best.

Supplies depend on what comes in from the health ministry, non-profits, or are even recovered from bombed-out buildings — like the two wheelchairs carried in by soldiers on Wednesday afternoon.

“There are not enough insulin syringes and insulin needles. Heart medication ran out very quickly. There is enough paracetamol but that won’t cure the patient.”

Even if Molchanova can’t always offer medical care, she, her husband and two other doctors also provide relief to Bakhmut residents by welcoming them into the basement warren next to the health center where they live.

The low-ceilinged, lamp-lit rooms are lined with high stacks of thick logs to stoke the stoves.

With a generator on hand, residents can charge phones and access a now rare Internet connection as they escape the biting cold.

Icy weather may mean Molchanova no longer worries about refrigerating insulin, but the temperatures have brought in residents suffering with colds or burns from stoves.

For others, it has been deadly and often it is Molchanova who fills out multiple death certificates a day.

Oleksiy Stepanov came to see the doctor for a death certificate for his 83-year-old neighbor, who died at home where the windows had been blown out.

Tetiana, who asked not to give her last name, came to pick up medicines for her neighbor, an 81-year-old man who is deaf, blind and bed-ridden.

“He has no clue there is a war on, that we’re being shelled,” she said.

Once paid by his family to care for him, she stays now of her own accord.

“I’m afraid of taking this old man with me. He’s in no condition to travel,” she said. “I won’t leave.”

Even if she doesn’t understand why some people have not fled, especially families with children, she feels bound to stay and care for them.