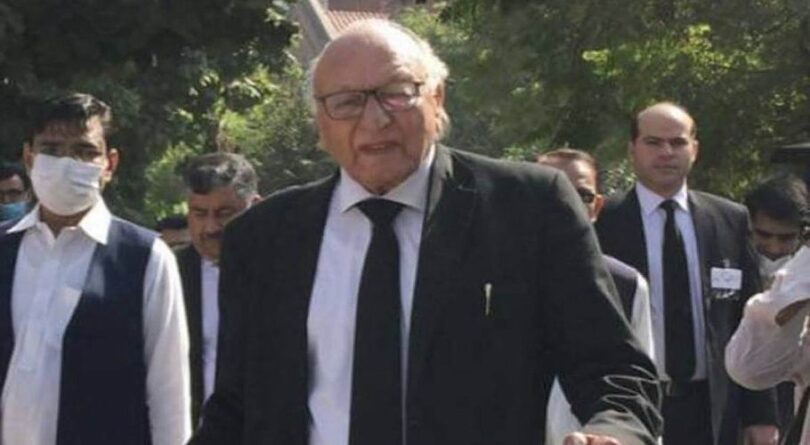 In the court-rooms of the Peshawar High Court, often could be spotted an aged, but towering figure, endowed with great persona. The distinct dignitary, when he approached the rostrum, had the charisma and magnetism of commanding the attention not just of the judges, but of the entire court. The dignitary could be none other than the legendary Latif Afridi.

Born into a noble Afridi family of Tirah on 14th November 1943, Afridi (commonly known as Lala) was the perfect combination of tribal and modern. He did his Master’s from Peshawar University in 1966. Two years later, he did his LLB from the same institution.

In his youthful days, Afridi developed a profound sense of justice and a willingness to speak truth to power, virtues that would define him for the rest of his life. In the 1965 presidential elections in Pakistan, Afridi supported Fatima Jinnah, the sister of Pakistan’s founder against Field Marshal Ayub Khan. For his open and outspoken support Afridi was expelled from the university, but his resolve and courage remained undiminished.

Afridi believed that the jurisprudence of Pakistan had taken a wrong turn in Dosso v. Federation of Pakistan (1958) where the Supreme Court of Pakistan, headed by Chief Justice Muhammad Munir had effectively validated the first martial law by relying upon Hans Kelsen’s ‘General Theory of Law and State’. Afridi was perpetually critical of the doctrine of ‘necessity’ and ‘revolutionary legality’ and found them to be equally flawed.

As a consequence of this scholarly orientation, Afridi was also critical of military leaders and dictators who seized power in Pakistan and abrogated the Constitution in vogue.

During the lawyer’s movement, when General Musharaf launched an assault upon the superior judiciary, Afridi played a crucial role in organizing and leading the lawyers from Khyber Pakhtunkhwa. Afridi was a natural leader. He was elected as the President of the Supreme Court Bar Association, President of the Peshawar High Court Bar Association multiple times, Vice Chairman Pakistan Bar Council and Member of the National Assembly. He rose to high positions but never forgot his roots.

Afridi was a seasoned lawyer, who ran a successful legal practice in Peshawar representing litigants before the Peshawar High Court and the Supreme Court. He proudly confided in me that he had contested over ten thousand cases for free during the course of his career at the bar. And such cases were inevitably contested by him representing labour, farmers, tenants and other destitute people who could not afford legal representation.

In person Afridi was kind, generous and warm. His hospitality was profuse, with Mr. Afridi regularly entertaining guests at his house. His guests would range from sophisticated Government Ministers to simple tribal folks. Mr. Afridi would treat all his guests with dignity and honour, a reflection of his own nobility.

He was a unique lawyer the like of whom are seldom found in Khyber Pakhtunkhwa. Mr. Afridi’s bedroom was littered with books of all kind. According to him, a good lawyer needed to know not only the law, but beyond the law. Mr. Afridi was fascinated by science, the working of the cosmos, the origin of life, the stages of social development, the history of human kind, the sources of conflict, the far sides of space and the inner working of the human mind.

Afridi’s scholarly intellect combined with his impeccable integrity made him the voice of reason in the Khyber Pakhtunkhwa bar. And because he was so widely respected and revered, he could take even an unpopular stance and convince his brethren lawyers by impressing reason and logic upon them to change their choices and change their minds. Mr. Afridi reserved his chastisement not just for lawyers, but directed it at judges as well.

Many of us are witness to Afridi standing up for another lawyer or a litigant before a judge, and forcefully iterating that it was the judge who was stepping out of line, and not the other way around. Afridi could afford to do this, as he had decades of capital behind him in the form of good reputation and unimpeachable integrity. Yet like a true statesman, the legendary Mr. Afridi never abused his accumulated capital for ulterior or nefarious ends.

In his final days Afridi had aged, but his convictions remained as firms as the famous stanza in Alfred Lord Tennyson’s poem ‘Ulysses’; “one equal temper of heroic hearts, made weak by time and fate, but strong in will, to strive, to seek, to find, and not to yield”.
It is sad, yet at the same time befitting that a champion of the rule of law, who spent his whole life defending and protecting the rights of others, should lose his life within the vicinity of the Peshawar High Court, at the altar of an institution dispensing justice, on a day when was engaged in fighting for the rights of others.