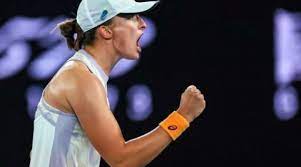 MELBOURNE (Reuters): AC/DC remains one of Iga Swiatek’s go-to rock groups to get her pumped up for matches but while the world number one’s groundstrokes are leaving rivals thunderstruck she says she is still looking to manage expectations at the Australian Open.

Three-times Grand Slam winner Swiatek, who has said listening to the likes of Guns N’ Roses helped her win her first major title at Roland Garros in 2020, has gone as far as the semi-finals at Melbourne Park but is hot favourite this time around.

The Pole moved into the third round with a 6-2 6-3 win over Camila Osorio on Wednesday and said there was no escaping the pressure of being ranked number one.

“It’s not easy because with that number the expectations are a little bit higher from outside, but also for myself a little bit,” she said.

“I’m trying to manage that properly. Also trying to kind of stay in my bubble during the tournament so I’m not going to get distracted by all of that.

“I don’t want people to take for granted that if you’re world number one that you’re going to win everything because we still have to fight for every match.”

While some players adhere strictly to pre-match rituals for luck Swiatek said she liked to switch things up with her playlist.

“I’m not superstitious, I would say I actually just changed my playlist before the match,” she said, listing Red Hot Chili Peppers, Black Sabbath, Led Zeppelin and Lenny Kravitz among her favourites.

“I was listening to the same songs for like three years.

“It was tough. But I did that and it’s working, so hopefully the songs are not going to mess up my head.”