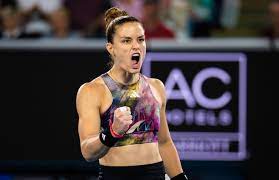 MELBOURNE (Reuters): Maria Sakkari took umbrage with opponent Diana Shnaider’s vocal celebrations after winning points at the Australian Open on Wednesday but silenced the teenage qualifier with a finger-wagging rant on the way to a comeback 3-6 7-5 6-3 win.

World number 106 Shnaider, wearing a black and white polka dot kerchief, made a habit of roaring in Sakkari’s direction and throwing her icy stares, and it got too much for the Greek sixth seed at 5-5 in the second set at Margaret Court Arena.

After a wry grin, Sakkari grew serious and walked toward the chair umpire holding up a finger, saying: “If she screams one more time in my face … No, no, no, no.

Taking charge of the situation appeared to work for Sakkari, who duly broke the 18-year-old Russian to take the set, then locked down the match to reach the third round.

“During a match you can be very pumped or, you know, the way that some players celebrate their points, it’s not appropriate,” Sakkari later told reporters.

“I wasn’t happy with that. But, you know, she never did it again. That was very nice of her.”