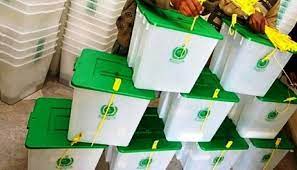 ISLAMABAD: The Election Commission of Pakistan (ECP) has rejected the latest request from the Sindh government to defer local body elections in the province, declaring the vote will definitely take place tomorrow Sunday.

The decision was taken at an emergency meeting of the ECP which was held in Islamabad on Saturday afternoon. Chief Election Commissioner Sikandar Sultan Raja chaired the meeting virtually from Lahore. An official handout signed by the ECP spokesperson stated the ECP’s decision while directing the Sindh government to ensure “foolproof preparations for peaceful elections”.

Earlier, the ECP called the meeting after intelligence agencies sensitized the election commission about the terror threat during the polls in the province. In the wake of fresh information, the ECP has summoned a meeting today (Saturday) under the chair of Chief Election Commissioner Sikandar Sultan Raja in Islamabad. The Sindh government has also written a letter to the election commission requesting it to postpone the local government elections keeping in view the security threats. It requested the commission to delay the polls till it arranges security at the polling stations.

The government said that the deployment of Army troops and civil armed forces at polling stations is urgently needed. An important meeting was held under the chair of Sindh Chief Secretary Sohail Rajpoot where a briefing was given on the security arrangements during LG polls in the province. The meeting was attended by Secretary Election Commission Umar Hameed, IG police and other government officials.

During the meeting, the police authorities told the participants that they are ready to deploy policemen at polling stations but there is security risk involved. They have threats from proscribed organizations including BLA and TTP. They said that 63,000 police officials are required to provide security at Karachi and Hyderabad divisions. “If these police officials were deployed there, then cities may face law and order situation,” they maintained.

Sindh IG Police Ghulam Nabi Memon said that not even a single polling station could be declared normal in the province and ‘that’s why we are facing a shortage of police officials for their deployment at polling stations’. He informed that only in Karachi, 1,340 polling stations have been declared ‘most sensitive’ while 3,655 have been confirmed as ‘sensitive’.

The IG police said that as per the SOPs defined by the ECP, eight security officials would be deployed at the most sensitive polling station while 4 will be deployed at a sensitive polling station. “Using this criterion, we have to deploy 25,340 security officials in Karachi and 19,536 in Hyderabad. The total deployment will be 44,876,” the IGP added. He said besides this static deployment, thousands of other security personnel would be needed for patrolling and other duties during the polls.

He said that the total strength of police officials in Sindh is 119,000 and it is not possible to spare 70,000 out of them for poll duties. He said that the election commission needs these officials for at least for 3-4 days. He said that during last 1.5 months, the sensitive agencies have issued 17 security alerts for Karachi and other areas of the province.