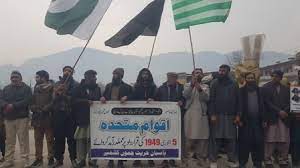 MUZAFFARABAD (INP): The long march organized by Pasban-e-Hurriyat Jammu and Kashmir against Indian illegal occupation on Jammu and Kashmir besides pressing for the Kashmiris’ demand for right to self-determination reached Muzaffarabad on Thursday, after three days.
Seventy five people started the march from Athmuqaam area of the Neelum Valley on Tuesday (December 27). During the march, the participants carried flags and chanted slogans against Indian illegal occupation of Jammu and Kashmir.
The march culminated at Burhan Wani Shaheed Chowk. It was led by Chairman Pasban-e Hurriyat Uzair Ahmad Ghazali, Vice Chairman Usman Ali Hashim, Muhammad Ismail Jagwal, Muhammad Ishaq Shaheen, Khawaja Muhammad Sadiq, Tanzeer Iqbal, Liaquat Ali Rana, Muhammad Fayyaz Khan, Faisal Farooq Sheikh, Muhammad Mushtaq and Imtiaz Aziz Khan. Speaking on the occasion, Uzair Ahmed Ghazali said that the purpose of the march was to repeat the demand for granting of the right to self-determination to the Kashmiri people and holding of an impartial plebiscite in Jammu and Kashmir.
“We demand of the international human rights organizations that they should play their role for the release of Kashmiri prisoners languishing in Indian jails,” he said. World community should come forward and declare all the illegal actions taken by Modi government on Kashmir on August 5, 2019 null and void, he added.
Uzair Ghazali appealed to the people of Azad Jammu and Kashmir to come out of their homes on the occasion of Right to Self-Determination Day on January 5 and demand of the United Nations to fulfill its commitments regarding grant of this right to the Kashmiris.
He said that in the next phase of the march a rally will be organized on January 5 from Burhan Wani Chowk to the United Nations Observer Office where a resolution will be presented for provision of the right to self-determination to the Kashmiris.