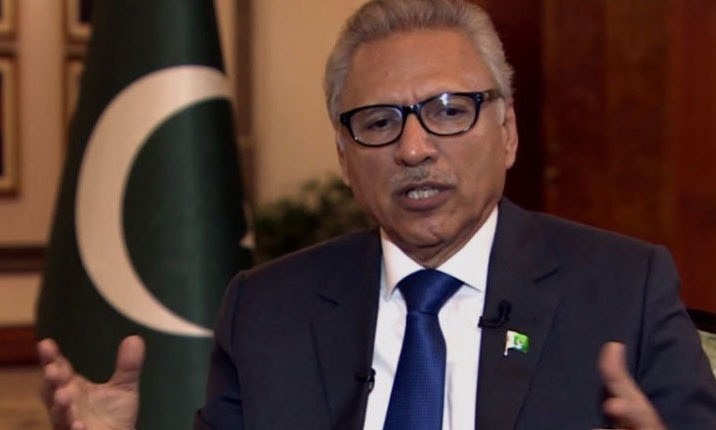 ISLAMABAD (PPI): President Dr Arif Alvi has urged the need to adopt environment-friendly, energy-efficient and cost-effective construction and housing practices to provide quality accommodation for the Pakistani people.
Promoting vertical construction in the country could help provide cost-effective and affordable housing to the poor and lower middle class, besides overcoming the shortage of space in urban areas, preventing unplanned growth of cities, and saving agricultural land from encroachment, he expressed these views while addressing the closing ceremony of the 2nd Pakistan International Property Expo and Convention, organized by the Pakistan Association of Exhibition Industry (PAEI), at Aiwan-e-Sadr, according to a PID statement issued on Thursday.
Founder Chairman of PAEI, Mr Khurshid Barlas, members of the housing and construction sector, businessmen, and government officials attended the ceremony. Addressing the ceremony, the President said that the government had been focusing on the development of the construction and housing sector as it played an important role in creating jobs, advancing growth and economic development, and fulfilling the growing housing demands of the rising population of the country.
The President called for discouraging the tendency to make unplanned housing schemes lacking basic civic amenities at all levels, adding that no housing society should be approved until it met all the codal formalities, provided civic amenities, was environment friendly and catered to the needs of the lower segments of society. He also called for promoting aesthetically pleasing construction in the country, besides adopting green building practices, including the promotion of solarization and vegetation on unutilized roofs in urban areas.
The President said that no society could rise until it lifted its vulnerable and poorer segments of the society out of the poverty trap. He highlighted the need for the public and private sectors to join hands to bring innovative and out-of-the-box solutions for the rehabilitation of the residents of Katchi Abadis and resolving their issues.
He stated that Katchi Abadis suffered from a lack of civic amenities and were inhabitable, adding that inclusive and poor-friendly development should be promoted in the country so that no one was left behind and the fruits of development reached all segments of the population. The President said that every eligible citizen of the country should responsibly take part in politics, and intelligently vote for electing capable, efficient and effective representatives. He said that leadership should be capable of taking the right decisions at the right time, fighting against corruption and corrupt practices, and expediting the decision-making process via the state machinery to lift people out of poverty.
The President said that government policies should be targeted towards creating an economic system with the help of the private sector to ensure the equitable distribution of precious national resources to the underprivileged segments of the population in the underserved areas of the country. He added that proactive steps should be taken to ensure that less developed areas of the country were brought at par with other areas, instead of concentrating development activities and initiatives in a few urban centres.
The President also urged the members of the business community to take proactive and practical steps to increase the representation and participation of women in different sectors of the economy, particularly in the housing and construction sector. He called for providing a conducive, women-friendly and harassment-free environment in the workplaces and called for including women in different trades. He cited the example of Hazrat Khadija (RA) who was an ideal Muslim woman and used to actively participate in business and trade activities. The President said that all sectors of the economy have to be lifted parallelly and no sector of the economy should be left unattended. He said that the public and the private sectors should come up with comprehensive solutions to the issues faced by the economy. He expressed his full confidence in the human resources of Pakistan, its natural resources, and the resilience and tenacity of the nation to surmount the challenges faced by them.
The President also underlined the need to motivate specialists in every sector, especially in the housing and construction sector to bring low-cost solutions to provide housing to the flood affectees who had lost their livelihoods and shelter as well as to people without reasonable living in other parts of the country.
The President appreciated the management of PAEI for holding exhibitions, organizing seminars and conferences in all parts of Pakistan, in the region and around the world to promote “Brand Pakistan”, benchmark best practices in different sectors, create joint ventures with the world leaders in different sectors, and promoting trade and investment in different fields. Addressing the ceremony, the Founder Chairman of PAEI, Mr Khurshid Barlas, highlighted that PAEI had been making efforts to promote “Brand Pakistan”, improve Pakistan’s image, enhance trade and investment in the country. He said that PAEI had organized almost 500 different events, conferences, seminars, and expos nationally, regionally, and internationally to promote different sectors of Pakistan’s economy, including gemstones, jewellery, sports, and pharmaceuticals. He added that Pakistan needed investment, foreign exchange, and economic activity and the business community of the country was playing an important role in this regard.
He also called for regulating the construction sector of the country, developing linkages, and imparting training to people associated with the construction and housing sector. Earlier, the President distributed shields among the representatives of companies in the housing and construction sector for their exceptional performance. She said the Afghan-interim authorities had assured to resolve all such issues soon. She said Pakistan has a natural stake in peace and stability in Afghanistan and it would continue to engage with the neighbouring country.