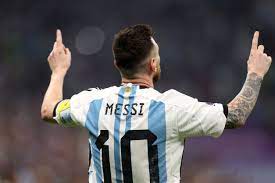 DOHA (Reuters): As if he had not made enough fairy-tales, Argentina’s little genius Lionel Messi has saved the potentially most magical script for his last World Cup — with one line left to write.

With immense pressure on him to match the late great Diego Maradona and send the trophy back to Buenos Aires, Messi has lit up the Qatar tournament while others in the superstar stratum — Neymar, Cristiano Ronaldo — have underwhelmed and gone home.

From Argentina’s opening game until their semi-final win over Croatia, Messi, near the end of his career and at his fifth World Cup aged 35, has been the tournament’s out-and-out star.

Smashing so many records it is hard to keep track, Messi has beaten Maradona’s tally of World Cup goals and appearances for Argentina, and on Sunday will jump ahead of Lothar Matthaeus’ joint record 25-match appearances at the tournament.

Beyond the dazzling data, however, it has been Messi’s mesmerising motion, and joyous celebrations, that have electrified football fans around the world.

Spending large passages of play at walking pace and barely bothering to defend at times, Messi has waited for his moments, employing with deadly effect his low centre-of-gravity, stunning change of pace and shimmying runs with ball glued to feet.

He is “a sprite floating on the periphery of the game until the moment is right,” wrote British sports writer Jonathan Wilson. “You can mark a man; much harder to mark a ghost.”

After a shock opening upset by Saudi Arabia, it was Messi who rallied the team: five wins followed.

His best goal was a sumptuous low strike from outside the box against Mexico.

And pundits are still shaking their heads over his pinpoint pass to Nahuel Molina for Argentina’s first goal against the Netherlands in the quarter-final. What made it remarkable, and a candidate for one of the all-time great assists, is that Messi did not look up yet found Molina with preposterous perfection.

It was in that game where Messi cemented his Qatari love affair with Argentine fans, who in the past have sometimes compared him harshly against Maradona’s extrovert personality, passion for his country, and 1986 World Cup triumph.

After scoring a penalty to send Argentine fans into delirium, the usually impeccably-behaved Messi ran towards the Dutch bench cupping his ears in a provocative gesture.

Then after the game, he confronted a Dutch striker with a jibe caught on camera: “What are you looking at, fool?”

Though some pundits criticised him for disrespect, Argentine fans were largely delighted at the Maradona-like flashes of defiance from the introverted Messi.

Some have had tattoos of the phrase.

“The game against Holland was when his ‘inner Maradona’ finally came out. They are one. They are eternal. They are Argentina!” said one ecstatic fan Jorge Castellanos, who was at the game with a flag depicting both men arm-in-arm.

Despite such adulation, everyone knows that true immortal parity with Maradona – at least in the biggest sporting tournament on earth – does still hinge on beating the French.

Many non-Argentines have long had Argentina as their second team, hoping Messi will win the World Cup if their own nation cannot to complete what would be a beautiful story.

Despite worries that he was too small, the new boy shone in the junior ranks before coach Frank Rijkaard gave him a senior debut at the age of 16 in a friendly against Porto in 2003.

Messi went on to become Barcelona’s all-time top scorer and appearance maker with 672 goals in 778 games.

In one season, 2011-12, he smashed La Liga’s scoring record with 50 goals. In total, he won 35 trophies with Barcelona, including 10 La Liga titles and four Champions League trophies, before moving to Paris St Germain last year.

Along the way, he won the Ballon d’Or a record seven times and FIFA Player of the Year six.

For Argentina, he is the all-time top scorer and led his nation to Copa America glory last year after a 28-year trophy drought including a string of heartbreaking finals defeats.

All that is missing in the Messi story is a World Cup.

But even should the unthinkable happen and Argentina lose, it seems he has won over a nation that now knows Messi loved the shirt every bit as much as Maradona, brought them wondrous moments over the years, and simply could not have tried harder or come closer to lifting the World Cup.

Argentine journalist Sofia Martinez Mateos summed up the mood when she ended an interview with Messi this week not with a question but with a speech on behalf of the nation.

“The final is coming and of course we all want to win, but I want to tell you that whatever the result, there is something no-one can ever take from you,” she told a visibly moved Messi.

“You have entered the heart of every Argentine. Honestly, there’s not a kid without your shirt. You have marked all our lives … Carry it in your heart because that is more important than a World Cup and you’ve already won that, thanks Captain.”