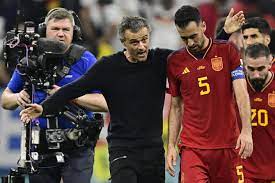 “I would like to announce that after almost 15 years and 143 matches, the moment has arrived to bid farewell to the national team,” wrote the 34-year-old Barcelona stalwart on his social media platforms.

Busquets is the last member of the 2010 team to bow out of international football — he was also part of the team that lifted the 2012 European title.

He was captain of the 2022 World Cup side that fell to a penalty shoot-out defeat to Morocco in the last-16.

Only his fellow 2010 team-mates Iker Casillas (167) and Sergio Ramos (180) represented Spain more often than him.

“It has been an honour to represent my national team and help lift it higher, to being European and World champions. To have been captain and to have played so many matches with a certain level of success and always trying to do my best,” Busquets wrote.

He made his international debut in the build up to the South African World Cup where Spain wowed fans with their tika-taka passing game.

Alongside his Barcelona teammates Andres Iniesta and Xavi Hernandez, Busquets was at the heart of the World Cup and Euros double.

Vicente del Bosque was coach of that team and had high praise for Busquets.

“He will transcend the generations due to his immense heritage,” del Bosque said.

Busquets said from now on he would be “just another fan giving my unconditional support”.