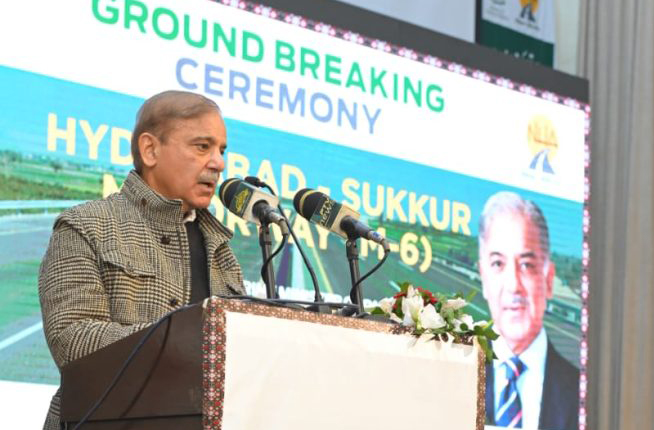 SUKKUR/HYDERABAD (APP): Prime Minister Shehbaz Sharif on Tuesday said the development of road infrastructure connecting all provinces, particularly the disadvantaged areas of the country, was crucial for strengthening the national economy. The prime minister, who twice performed the foundation-laying of M-6 motorway in Sukkur and Hyderabad cities of the Sindh province respectively, said connecting the deprived areas, including Balochistan and Sindh, would pave the way for economic and social development, besides creating new business opportunities.
With its ends in Sukkur and Hyderabad, the 306-km-long M-6 will be completed with Rs 307 billion within 30 months as per international standards. The M-6 portion will complete the North-South Motorway Corridor, also known as the Karachi-Peshawar Motorway, which will interconnect major cities of the country. The prime minister, in his address at the two events, said it was a matter of satisfaction for the coalition government to restore construction work of the M-6 motorway that faced a prolonged delay due to the inefficiency of the previous government.
He emphasized upon ensuring the quality and standard of the M-6 motorway not less than rest of the motorway network in the country.
He directed the relevant authorities to complete the public-private project within the stipulated time period.
The prime minister encouraged Planning Minister Ahsan Iqbal to promote further projects on public-private projects so as to achieve the goals of development and prosperity.
He also called for improving road connectivity from Balochistan to the up-country in order to connect the all-important Gwadar Port and mainstream the province in the national economy. He announced the completion of the Sukkur-Rohri Bridge, which was earlier announced by former prime minister Nawaz Sharif and also directed improvement of Karachi-Hyderabad Motorway to avoid traffic congestion and accidents. He also announced that the Federal Government would contribute Rs one billion to Sindh’s development fund to mitigate the sufferings of flood-affected people and urged the provincial government to allocate the same amount from its exchequer. He mentioned that federal and provincial governments, national and provincial disaster management authorities, and international aid agencies were collaborating in the rehabilitation efforts. Shehbaz Sharif said Pakistan in the upcoming donors conference to be held in Geneva in January would urge the international community to provide assistance in the wake of massive life and infrastructure losses due to the recent flash floods.
He criticized former prime minister Imran Khan for instigating public for his personal gains, and said instead, he should have protested over the manipulation of the cartels of sugar and wheat during his tenure. He hoped that the public would not fall prey to his negative campaign.
Sindh Chief Minister Sindh Syed Murad Ali Shah regretted that the apathy of the previous government delayed the construction of M-6 for over three years and emphasized that 25,000 jobs related to the project needed to be given to the locals. He requested the prime minister to allocate an amount for the Sehwan Bypass in next budget. He highlighted the need for the dewatering of flood-hit areas and expressed confidence that the Federal Government would continue to extend assistance to Sindh in that regard.
Federal Minister for Water Resources Syed Khurshid Shah said the M-6 motorway would prove to be a milestone in strengthening of the economy by promoting intra-country trade activities. Federal Minister for Communications Asad Mehmood said the construction of the Sukkur-Hyderabad Motorway (M-6) was a long-standing demand of the people of Sindh, which had been fulfilled by the present coalition government.
He expressed satisfaction that Shehbaz Sharif was fulfilling the vision of former prime minister Nawaz Sharif regarding establishing a large network of motorways in the country as a step of development.
Federal Minister for Information Technology Amin ul Haq said the M-6 motorway would connect various cities of the country and would promote trade activities. Federal Secretary for Communications Capt (retd) Khurram Agha said the government would provide only Rs 9.5 billion and the motorway would be constructed on a public-private basis. Jamiat Ulema-e-Islam leader Sindh chapter Rashid Mehmood Soomro said the Pakistan Democratic Movement (PDM) would unitedly work and carry out of development projects across the country in the best public interest. Federal Minister for Planning and Development Dr Ahsan Iqbal, Minister for Information and Broadcasting Marriyum Aurangzeb, members of the provincial assembly, and officials of the Sindh government attended the two events.
The six-lane motorway will comprise 15 interchanges, a large bridge over the Sindh River, 82 bridges over canals, 19 underpass bridges, six flyovers, and 10 service areas. The project will create around 25,000 jobs.
The M-6 will pass through the districts of Jamshoro, Hyderabad, Matiari, Benazirabad, Nowshero Feroze, Khairpur, and Sukkur. Service areas and rest areas will be provided at every 50 km on both sides of the highway.