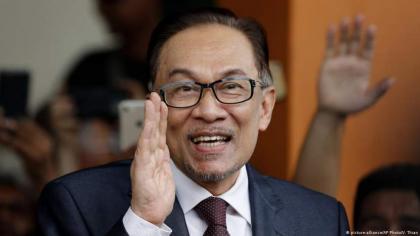 KUALA LUMPUR (AFP/APP): Malaysian Prime Minister Anwar Ibrahim won a confidence vote in parliament Monday, cementing his mandate a month after an inconclusive election result forced him to ally with the graft-tainted party of his former political rivals.
The affirmation of support was done via voice vote late in the day, with those in favour of Anwar’s leadership drowning out those opposed, said Johari Abdul, speaker of the lower house of parliament.
Anwar told AFP he had the support of 148 members of the 222-seat legislature, giving him the two-thirds majority necessary to pass reforms after a divisive November 19 general election.
House speaker Johari, a close Anwar ally, got 147 votes when he was elected to his post earlier Monday, with one MP from the ruling coalition absent, said Shamsul Iskandar Mohamad Akin, an aide to the premier. He had earlier said the speaker got 148 votes.
Analysts said the strong majority should bring political stability to the Southeast Asian nation, which has seen four leadership changes in as many years.
Anwar’s Pakatan Harapan (Alliance of Hope) coalition won 82 seats, leading rivals but falling short of the simple majority needed to form a government.
A days-long political stalemate followed, as a rival group led by former prime minister Muhyiddin Yassin said it had also garnered majority support, forcing Malaysia’s king to intervene.
Anwar, a long-time opposition leader, was sworn in as the country’s 10th prime minister on November 24 to head a unity government.
This meant, however, that the reformist politician who campaigned on an anti-corruption platform, had to form an alliance with Barisan Nasional, the graft-tainted party of ex-leader Najib Razak.
Najib is currently in jail for money laundering and abuse of power for offences linked to a massive financial scandal at state fund 1MDB.