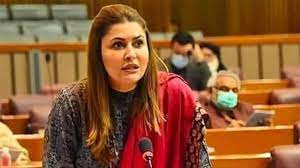 ISLAMABAD: Minister for Poverty Alleviation and Social Safety, Shazia Marri has said that several projects are in the pipeline for recovery and rehabilitation of the flood-affected areas.

Speaking to the points of GDA leader Ghous Bux Khan Mahar in the National Assembly on Tuesday, she said the government has effectively highlighted the plight of flood victims and secured support of the international community. She said we will have to build a climate resilient infrastructure to avert future disasters.