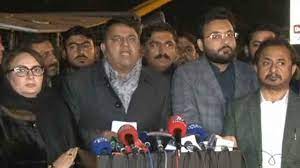 Mr Chaudhry stated unequivocally that the PTI will simply return to the NA, gaining three slots in the process, but that the decision to do so yet to be made. Talking about toppling the federal government, Mr Chaudhry said, “If the government would not show seriousness in terms of talking about the electoral framework, then we will topple the PDM-led government.” He also claimed that most of the PML-N lawmakers were in contact with the PTI leadership.

Lambasting Interior Minister Rana Sanaullah, Mr Chaudhry said, “Rana Sanaullah talked about conquering Punjab. It seems as if Sanaullah will have to sacrifice his party’s presidency in the Punjab province.

Recalling his claim that PTI chief Imran Khan will be the next premier of the country, Mr Chaudhry said efforts to weaken him underway, which was quite deplorable. Speaking on the local government elections in Karachi and Hyderabad, Mr Chaudhry said the results would have poured in within 30 minutes through the EVMs, which is why the PML-N, PPP opposed the usage of EVMs.