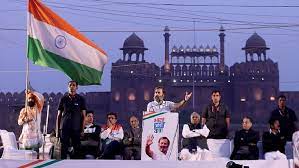 Gandhi began walking the length of the country over 100 days ago from India’s southern tip, hoping to repair the battered image of his Congress party and take on Prime Minister Narendra Modi’s dominant Bharatiya Janata Party (BJP).

Stopping to greet onlookers and holding public meetings, Gandhi plans to round off his march in northernmost Kashmir by January end.

“Long live Rahul Gandhi,” Congress supporters shouted, as the scion of a dynasty that has given India three prime ministers marched through Panipat on his Bharat Jodo Yatra, or Unite India March. The 52-year-old, a fitness buff with a thick salt-and-pepper beard, walks about 25 km (15 miles) per day, stopping for the night in a trailer van that moves with him.

Gandhi’s gruelling march that will cover about 3,500 km (2,200 miles) is a throwback to the padayatras or foot journeys through the rural heartland by past leaders, including independence hero Mahatma Gandhi nearly a century ago. The two Gandhis are not related.

This modern version of the march gives hundreds of thousands of people face time with a leader who has seemed distant and aloof in the past. Congress is hoping that the crowds Gandhi is attracting will eventually translate into votes.

“Now that he has hit the streets, people can see who he is,” said Dharamvir Arya, a 55-year-old farmer who had come to see Gandhi in Panipat. “If he remains in a bungalow, hidden, how will people know what he is like?”

Polling agency CVoter, which has tracked Gandhi’s approval ratings in nine states – four of which will hold local elections this year – as part of nationwide monthly surveys of 30,000 respondents, found the Congress leader’s popularity has risen markedly in most states through which he has marched.

In the southern state of Karnataka, which holds elections this summer, the percentage of respondents satisfied with Gandhi has jumped from 39% in January 2022 to nearly 58% immediately after the march passed through.

The once-dominant Congress controls less than 10% of the elected seats in parliament’s lower house and has been decimated in two successive general elections by the BJP, most recently in 2019 under Gandhi’s leadership.

Modi remains India’s most popular politician by a substantial margin and is widely expected to win a third victory in 2024. Over 60% of respondents across the country prefer Modi as prime minister to 30.3% choosing Gandhi, according to CVoter.

Analysts say Gandhi’s public image is improving but it may not be enough for the flagging Congress to immediately convert that into electoral success.

“To invest in Rahul Gandhi’s personal popularity is actually a fairly astute move,” said Neelanjan Sircar, a senior fellow at the Centre for Policy Research think tank in New Delhi.

“Does it yield electoral dividends? That, I think, is unlikely,” Sircar said, pointing to the BJP’s superior organisational abilities and formidable election machinery.

Digvijay Singh, a senior Congress leader, admitted the party had ceded space as an effective opposition, a function Gandhi’s march was now fulfilling.

“It is important, it is crucial,” Singh told Reuters.

Long seen by critics as a reluctant politician without the earthy skills to take on Modi, Gandhi’s cross-country march has also provided him a platform to hold the BJP to account on issues like communal polarisation brought by its muscular Hindu nationalist agenda, unemployment and inflation.

“The aim is to stand up against the fear, hatred and violence that is being spread in the country,” Gandhi told reporters late last month. “I think the march has been quite successful till now, and it has achieved more than we expected.”

For the BJP, Gandhi’s march is yet another attempt by the left-leaning Congress to remake his image but it does not pose much of an electoral threat.

The party intends to use the march as a springboard to reconnect with voters and revitalise its grassroots units, said Singh, the senior Congress leader.

“We would like to build up and reach every household,” he said. “We have to build up on this idea of Bharat Jodo (Unite India).”