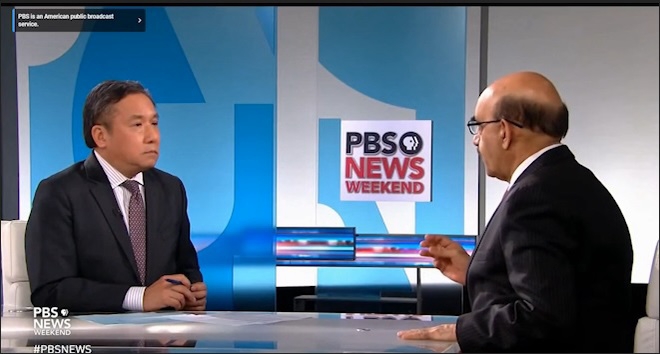 WASHINGTON DC :  “Pakistan is living with the consequences of worst climate induced disaster and needs immediate help of the international community.

The needs are dire,” Ambassador Masood Khan has said. “There is a misperception that the two phases of relief and recovery are over. They aren’t over,” he continued.

During his exclusive interview to one of the leading media outlets of the United States, Public Broadcasting Service (PBS), on the occasion of International Conference on Climate Resilient Pakistan, Pakistan’s top envoy has expressed the hope that under the leadership of the United Nations, United Nations Secretary General and with the convening power of states like the United States, Pakistan would be able to get the required support during the Geneva conference.

“We hope that we would be able to get pledges for the bulk of the requirements for rehabilitation and reconstruction. We need this assistance in the next three years to build climate resilient infrastructure and to preserve what we already have,” he continued.

Thanking the United States for its generous and prompt response to the humanitarian needs in the initial phase of relief and recovery, Masood Khan listed three roles that the United States is expected to play.

“One is direct contribution. We hope that the United States would announce a substantial contribution to our endeavor in Geneva.

Second is their convening power with other governments and with the international financial institutions. And the third is that it would be a partner in our climate resilient efforts,” Masood Khan said.

“The real objective of the loss and damage fund is to help vulnerable countries like Pakistan to transition, to move away from fossil fuels and invest in clean energy,” he continued.

“We will have to repurpose international community’s resources to support this fund,” stated Pakistan’s Ambassador to the United States.

“We have mobilized all our resources but we need the help of the international community particularly for this year,” Masood Khan said.