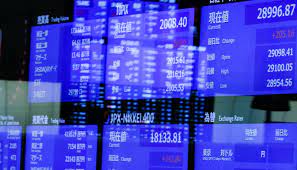 HONG KONG (AFP): Asian markets fell on Monday as traders weighed the prospect of a global recession caused by central bank moves to fight inflation. Equities took a turn south last week after monetary policymakers around the world signalled that while price rises appeared to be stabilising, more work would be needed to get them under control.

All three main indexes on Wall Street ended sharply lower Friday after the Federal Reserve warned that it would continue tightening monetary policy into 2023. That was followed by similar warnings from the European Central Bank and Bank of England, while data suggested economies were feeling the pinch, dealing a blow to sentiment heading into the Christmas break.

“With no shortage of economic headwinds, investors struggle to find something cherful about this holiday week after the two most dominant central banks cast a pall over the proceedings.” said SPI Asset Management’s Stephen Innes.

The sell-off in New York fed through to Asia, where Tokyo shed more than one percent, while Hong Kong, Shanghai, Taipei, Manila, Bangkok, Jakarta and Wellington were all in negative territory.

However, Singapore and Mumbai edged up, while London, Paris and Frankfurt opened higher.

Adding to the downbeat mood was a spike in Covid-19 cases in China following the country’s reopening after almost three years of strict containment measures.

While the move is expected to boost the world’s number two economy, there is a worry that businesses and China’s health system will be hit in the near term.

Still, Beijing flagged a number of measures aimed at kickstarting growth next year, including support for the beleaguered property sector.

Sylvia Jablonski of Defiance ETFs had an upbeat outlook.
She told Bloomberg Radio that “the market will look through the expectations of a future recession at some point and come back in because equities are starting to look cheaper and cheaper as we go along here”.

An expected pick-up in demand from the country helped drive a rally in oil prices, with both main contracts up more than one percent.