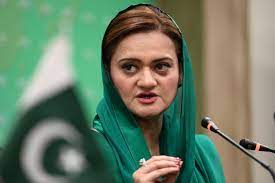 While addressing the press conference in Islamabad the PML-N leader said that the media and the nation needed to decide on the right and wrongs of the ongoing political fiasco, a campaign against the Pakistani Army was started from an official political party’s account, though the FIR had no specific name mentioned in it, and the election commission members were also threatened.

She slammed PTI for using foul language for a long time and if a person elected as a PM can appear in front of the court three times, then why not Imran Khan? If he is given immunity then everyone would demand it.”

The information minister said that Rana Sanaullah was framed in a case of 20kgs of the heroine, and yet the bag could not be found. Faryal Talpur was dragged into jail straight from the hospital, and almost all opposition members were jailed without warrants during Mr Khan’s regime.

Marriyum Aurangzeb stated “When Nehal Hashmi was involved in contempt of court, his whole party deprecate him and the court should draw this borderline.