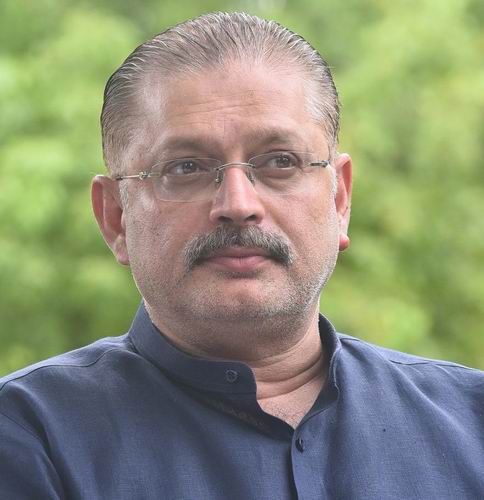 When Mohtarma Benazir Bhutto Shaheed returned home on October 18, 2007, after 8 years of forced exile there was a sea of people throughout to Karachi Airport. On that day, one slogan was being raised the loudest among the people. That slogan was “Marvi Malheer ji”. Benazir, Benazir. The slogan was created by the people themselves. (Because of her love for her country and her people, Shaheed Bibi was given the title of Marvi of Malheer (Malir)).

Marvi is the historical character, literature and poetry of Sindh, which is a metaphor of love for the land and people. This character does not exist in any other language. The people of Sindh express their love for their land in Marvi language. Marvi belonged to a poor family of motherland, rejected the life of luxury in King Umar Soomro palace to return to her homeland and her people. The great poet of Sindh, Shah Abdul Latif Bhitai, has narrated the story of Omar and Marvi in Sur Marvi. The people of Sindh sing this verse of Hazrat Shah Abdul Latif Bhitai in dedication, in which she addresses King Umar Soomro saying, “If I die in your country away from my country Malheer, O king of Umarkot, send my body to Malir. If my body reaches Malir, I will think that I have got a new birth.

After Marvi, the metaphor of love for the country is now the Shaheed Mohtarma Benazir Bhutto. She has become the character of not only the Sindhi language but the poetry of every language spoken in Pakistan, through which love for the motherland will be expressed.

Shaheed Bibi herself belonged to the Royal family. She was born with a golden spoon in her mouth. She not only left the life of queens but sacrificed her life for her land and her people. When Shaheed Bibi was returning home, she not only had an idea but was sure that she would be killed. On the night of October 18 and 19, 2007, bombs exploded near her truck in her reception crowd, in which more than two hundred workers were martyred. After such a big tragedy, on October 19, during a press conference at Bilawal House Karachi, when she was asked, “Will you still stay in Pakistan and run an election campaign?” “So Shaheed Bibi responded in a thunderous voice without any pause that “those people also want me not to run election campaign and go back. Those people are against the restoration of democracy in the country, but now if democracy is not restored, the dangers for Pakistan will increase. I will stay with my people.” There is no example in history of such bravery and courage. After the tragedy of October 18, while addressing every public gathering, Shaheed Bibi must have said that “Our life and death is with the people.” On December 27, 2007, she breathed her last in the midst of people and embraced martyrdom.

Consciously accepting death is not an easy task. This can be done by those who can feel the fragrance of soil. At one place in her book “Reconciliation”, Shaheed Mohtarma Benazir Bhutto writes that “I suffered the pain of my father’s arrest, imprisonment and murder and knew that such wounds of the soul never heal.” I could have done anything to save my children from the pain I suffered on my father’s death, but this was the only thing I could not do. I cannot leave my people. Shaheed Bibi loved her children very much. She did not want to make her children suffer through her death, which she had suffered after the death of her father Shaheed Bhutto. But Shaheed Bibi gave the proof of her love for her country and her people more than her children that every patriot and pro people will continue to be proud of her.

The great Telugu poet Shahdar Sharma has described the philosophy of love for country and people in a long poem. This poem has been translated into Urdu with the title “My Land My People”. This poem is the best expression of the thought and philosophy of Shaheed Mohtarma Benazir Bhutto. Shaheed Bibi herself also wrote a long poem in English, one stanza of which is “I am also a Marvi of my people”. “The Malir of Shaheed Bibi is the entire Indus Valley.” Her country in Malir comprised of Sindh, Punjab, Khyber Pakhtunkhwa and Balochistan. Gilgit-Baltistan and Kashmir are also included. This is the reason that on October 18, 2007, people from all over Pakistan were chanting the same slogan. Marvi Malheer ji-Benazir Benazir. Only Marvi can tell how to scarify for love of land. Marvi and Malir are related to body and soul. Just like the relationship between Marvi and Malir, so is the relationship between Benazir and Pakistan. The whole of Pakistan is Malheer and Benazir is its Marvi. Shaheed Mohtarma Benazir Bhutto is a metaphor of love for the land and people in every language of Pakistan. She is not only a great character of literature and poetry but also the pride of Pakistan.
(Writer is the Minister of Information and Transport, Govt of Sindh)